Aberdeen fly the flag in Europe 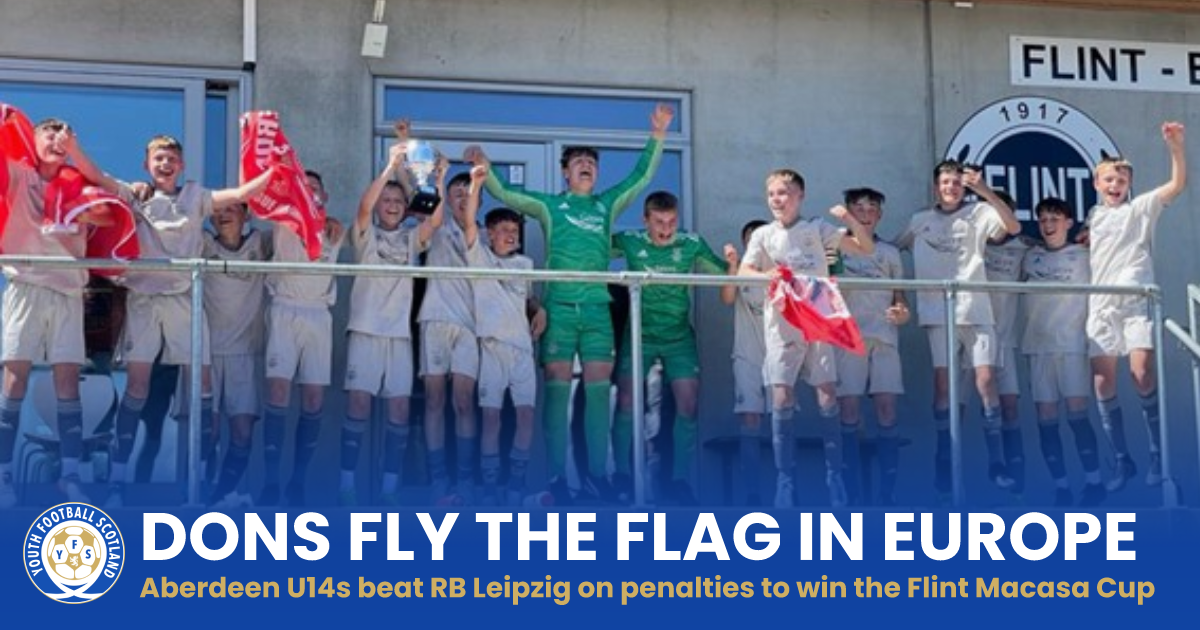 Aberdeen 2008s flew the flag for Scotland in Europe this week after being crowned champions of the Flint Micasa Cup 2022, which saw them see off RB Leipzig 2008s 5-4 on penalties to hold the trophy aloft.

64 teams travelled to Tønsberg, Norway to take part in the prestigious tournament. However, it was Aberdeen who were the last team standing. Beating Liverpool 1-0 in the semi-final gave the young Dons all the chance to go on and win the trophy when 2009-born Cayden McGuinness found the winning goal that sent Aberdeen into the final. RB Leipzig gave Aberdeen a tough game in the final as a goal from Jack Searle wasn’t enough and the 1-1 score line saw the game end in a penalty shootout. Joseph Teasdale netted the deciding penalty to see Aberdeen 2008s crowned champions!

The shootout finished 5-4, with keeper Theo Simpson making a decisive save. Speaking on the save, Theo said:

“It’s got to be one of the best feelings you can get. I’d dived that way for both of the penalties before that one, so I knew where he was going, but I didn’t want to get complacent. I knew that we still had to score our next two but yeah, it’s probably the best feeling you can get in football.”

Going into the tournament, Aberdeen were maybe quietly confident with Simpson being very complimentary of the Aberdeen staff and squad, he added:

“I think we were all quietly confident going into the tournament, we couldn’t have prepared much better in the weeks before and with the talent in the squad plus the coaches who were phenomenal the whole way, I knew it would have taken something to stop us.”

It is a massive achievement for Aberdeen who have made Scotland proud, but also the team around Cormack Park. Speaking on the achievement, Aberdeen academy director, Gavin Levey said:

“As an Academy we are very proud. One of our key strengths is the togetherness within our setup, so these types of successes are shared by us all.”

Aberdeen value its academy very highly, and this recent success will only do good, speaking on what this tournament will have done for the side, Levey said:

“The performances and results across the 3 European tournaments this weekend help enhance the belief that we belong to be amongst some of the best academies. The fact that the 2008s lifted the trophy provides massive inspiration for all the teams.”

The players rightfully have been receiving plaudits for the achievement, but the coaching staff has had a big role to play. Coach Greg Moir has enjoyed his side’s success, as he was one of the coaches during the tournament. Speaking on what the tournament, Moir said:

“It’s been great for the boys as we mixed the younger ones with the older players in rooms. Due to this it’s improved their relationships and also taken out the leadership aspect with some in helping them settle.”

As well as the silverware taken back up to the Northeast, it will not have been just winning that the side benefited from, Moir added:

“It was great for their development playing against different styles and formations. We played against teams who played from the back and others that went long. Also, we played against lots of different formations, a lot of the Norwegian teams played 4-5-1, and just gave us the ball to break them down which was interesting.”

As the trophy was lifted with the boys celebrating with ‘the northern lights’ being sung, it marks a special day for the Aberdeen academy and a great achievement for the 2008s and the club. Scotland’s most successful club in Europe have added another star at youth level.