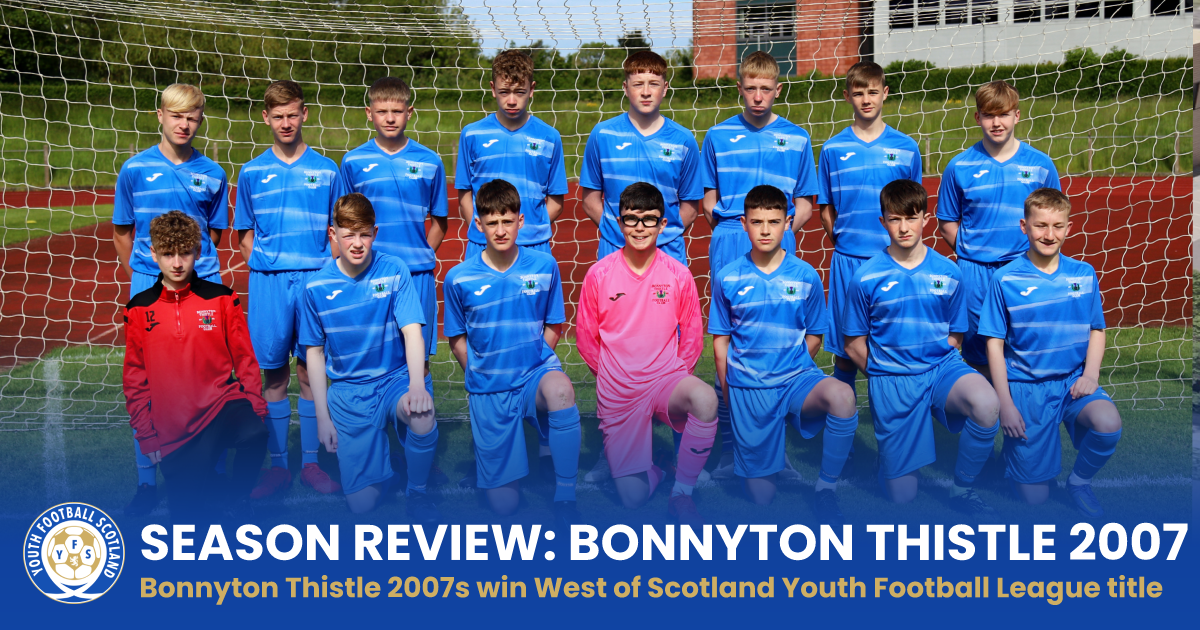 Bonnytown Thistle 2007s have been crowned the champions of the West of Scotland Youth Football League following a nervy climax to the season. Their success was made official on the last day of the season when the title was confirmed after a season-long battle with challengers Glenburn who ran out as runners up.

Coach Scott Purdie had heaps of praise for the stalwarts in defence who helped make it happen: ‘’Our Player of the Year in my opinion is between Lewis Hope, our centre-back, and Callum Hunter, our right-back. Our unsung hero is our Number 1, Blair Sibbald, who made multiple great saves to keep us in games.’’

Despite Bonnytown being crowned champions on the final day, it was actually Glenburn who led the way for most of the campaign as Bonnytown seemed to always have games in hand. It was only for the last two weeks of the season that Bonnytown found themselves top of the pile and they got the results to stay there, including a 4-1 win over Glenburn which increased their lead to 6 points. Purdie believed this was the game that fed his side the belief that they would end the season as champions.

Bonnytown ran out 4-2 winners on the final day of the season, which wrapped up what would be their only piece of silverware of the season. However, Bonnytown can take pride from their showings in other competitions. They were runners up in the Gavin Orr Memorial Cup to Drongan, and in the Scottish Cup, Bonnytown again lost to the eventual winners of the competition Hillwood, after a courageous 5-3 defeat in the 4th round.

Purdie addressed the cup exits in his ambitions for next season, stating that he wants to see Bonnytown ‘’do better in cup competitions next year’’ and ‘’to try defend our title’’ as he outlines his intentions for a potential trophy-laden season in 2022/23.

Everyone at YFS congratulates Bonnytown Thistle 2007s players and staff on their league success this year and wishes them all the best of luck going forward. Well done, Bonnytown.