Bridge of Don Academy bounce back 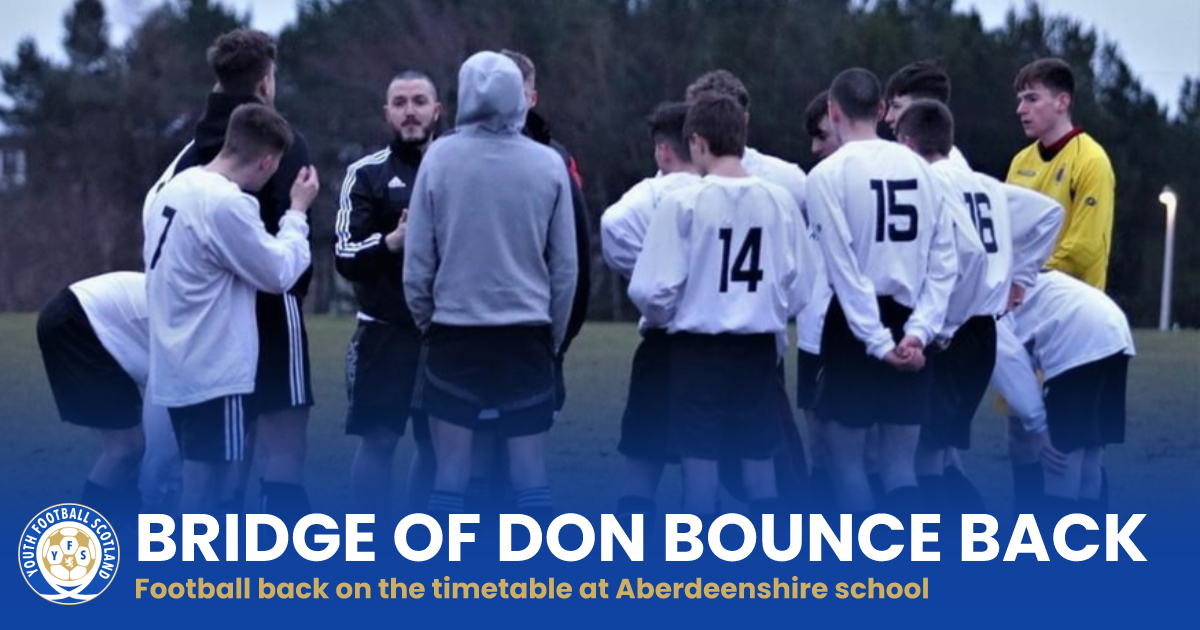 Bridge of Don Academy have been starved of a school football team for several years. However that was no more after Danny Flannighan joined the PE department in October, he was keen to get a team on the go.

Danny said: “When I first came I was surprised there wasn’t a school team, with the amount of boys that were there, I would say that it was surprising to see the quality, so coming in here seeing 20-25 boys turn up for the trial absolutely.”

With students playing in academies like Aberdeen but also playing grassroots clubs such as Dyce, it is a capable group Flannighan has at his disposal. However he is also keen to play players who don’t play football, outwith a kick about during school hours, he said:

“Yeah absolutely, school football is a bit different to boys club and pro youth, this is more an opportunity for pupils to take part with their friends, for people to enjoy. Competition is almost the secondary focus, it’s all about people coming and enjoying the sport, taking part in a team sport and be given the opportunity to represent the school.”

“For me it was just a big thing to be able to provide those opportunities and with those who do, if they are on the bench say, they aren’t on the bench the whole game, they are always guaranteed a good sizeable amount of game time.”

Bridge of Don seniors now compete in the President’s Trophy Section A (U18) and after back-to-back-to-back 4-1 wins against Cults, Albyn and Grammar seniors, things seem to be clicking for the boys after years of missing out on school football. Dyce and Bridge of Don midfielder Dylan Boyce said:

“Having the school team has brought togetherness within the group, as lots of other year groups have come together like S4, S5 and S6.”

“It was very important to have a senior team, i thought before in S1 and S2 we done really well for the school, won a cup, but then S3 and S4, we never had anything to get behind, and there is lots of boys within the school playing football at a good level it’s a bit of wasted talent and a shame we never got to compete together as we play against each other with our clubs most of us.”

It is clear that whilst not all of the players necessarily play football out with school, the togetherness of the group off the pitch has helped win games. Top scorer Jay Galbraith has helped catapult Bridge of Don seniors to 2nd in the President’s Trophy Section A (U18) Table, with a game in hand on top of the league- Bucksburn Seniors. The pair face off next in what will be a very entertaining game and will be a 6 pointer for the title: something Bridge of Don are confident they can achieve. Dylan said:

“I think we can do really well, I don’t see why not. We have a team capable so I think we could actually win the league, we’ve done really well so far, still yet to lose a game and school football give those who haven’t won a cup with their clubs to do so, lots of the boys are down the bottom end of the leagues and this gives them a good go.”

Flannighan also believes in his boys for the push for the trophy, whilst not adding too much pressure, he said:

”As long as they have got the focus that it’s different to boys football. They are here for the enjoyment, I think they can easily win the league. If they apply themselves and enjoy it, the rest will follow. After the first two games, dominated both games, they played it in the right manner, both games were different, Albyn were a bit more scrappy, energy wasn’t as big as it was against Cults, but the boys dictated the game and again, if we do that in every game up until the end of term, there’s no question they should go on to win.”

With that big title game coming up, a Bridge of Don 4-1 prediction wouldn’t be laughed at. However only time will tell, for now we will wait to see how the season unfolds. Best of luck to Danny Flannighan, Dylan Boyce and the rest of Bridge of Don Academy for the remainder of the season.