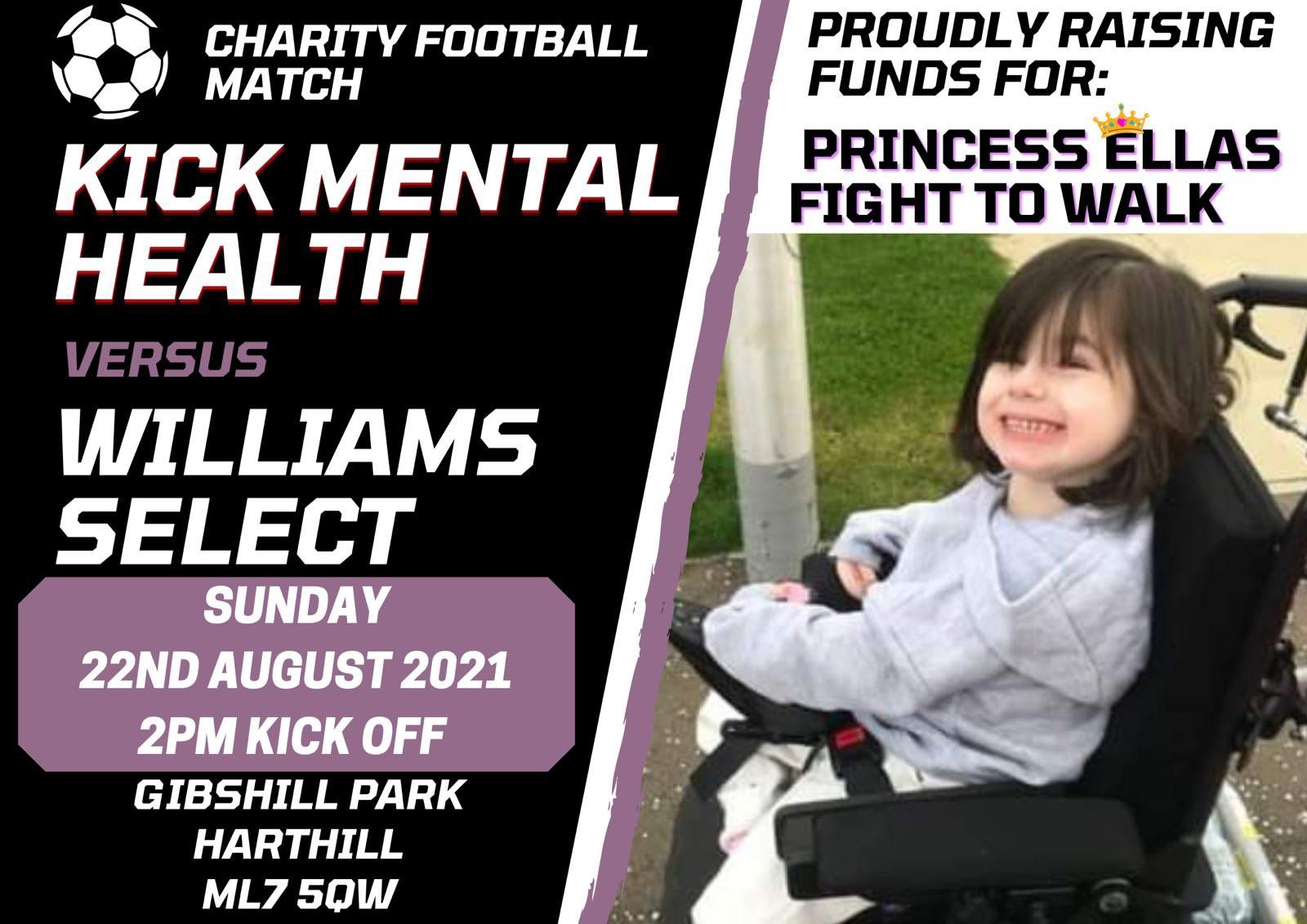 This Sunday, Youth Football Scotland will be reporting from Gibbshill Park, home of Harthill Royals FC, which will be hosting a charity football match in aid of ‘Princess Ella’s Fight to Walk’.

Five-year-old Ella, was born with a rare condition called Arthrogryposis, a congenital disorder, which has left her unable to walk or use her arms.

Her doctors have unfortunately said that they won’t give Ella the operation she needs, which would give her the chance to be able to walk and improve her quality of life.

However, a second opinion has been found from a doctor abroad, who has said he would be willing to take on the case and perform the operation that Ella needs.

In order to help raise funds for Ella’s family to be able to pay, for what would be life-changing treatment, charity match organiser, Lucas Paxton, spoke exclusively to YFS journalist, Matthew Muir about what gave him the inspiration to arrange the event.

Lucas said, “I had seen Williams post on Facebook about raising money for his daughter’s surgery. I have known William and his two daughters for around 3/4 years now as William was one of my football coaches at Murieston United. William believed in me when no one else did, he saw something in me, and he had time for every single player in our team. He boosted my confidence so much during my time at Murieston. I thought to myself ‘what’s stopping me from trying to do a sponsored event for Ella?’. William’s helped me through so much and has been so inspirational to me, why not give something back?”

On what entertainment there will be on offer during the game, Lucas explained. “There will be raffles, as well as the chance of winning some amazing football memorabilia, meal vouchers and even some alcoholic beverages.
The public can also get involved by donating a few pounds to Ella’s GoFundMe page and sharing “Princess Ellas Fight To Walk” page on Facebook. If you are able to attend, there will be buckets for donations.”

Lucas was unable to express his excitement when asked about how much he is looking forward to Sunday, as he concluded by saying, “To be able to give back to such a lovely family is incredible. Even for the 40 plus players who will be playing on Sunday, it’s a great opportunity for everyone to get back on the park after such a long time out due to Covid.

I very much hope this will be an event where we will see everyone getting together for such a special cause.
Hopefully through this match we will raise quite a bit of money but also a whole load of exposure. The more exposure we have, the more money we can put towards ‘Ella’s Fight to Walk’.”

There will be two charities playing against each other during the charity match, one being made up of ‘Kick Mental Health’ and the other ‘William’s Select’.

When I spoke to Ally Bingham, who will be representing the team from Kick Mental Health on Sunday, about how the organisation got involved and what they have already contributed to the event, he said,

“The group was asked by Lucas, who has been one of the groups participants for quite a long time and we were very honoured to be asked along.

As a group we have managed to get a few raffle prizes together and have already raffled off a signed top that raised £180 towards the total. We have asked as many people who are associated with the group to come down and spectate and hopefully that will add to the end total raised.”

Looking ahead to Sunday, Ally also said, “As a group we are really looking forward to getting so many participants along to help fundraise for such a great cause and we are very proud to have been asked to come along, our last charity game as a group was in February 2020, so it’s been a long time coming but this is the perfect game to get us back up and going.”

The other charity, ‘William’s Select’, has been chosen by Ella’s father William Green, who has been trying so hard to raise funds for his daughter’s operation.

On how much he is looking forward to Sunday’s event, he said, “I am really proud to be representing my daughter, excited to put the boots back on and seeing a lot of people there, supporting both charities.”

William admitted it was hard at the start, when he began to raise awareness of Ella’s condition but it has been very humbling to have had so much support. He continued, “It has been amazing the number of local people who have offered to help raise awareness for my daughter. I am so grateful, and the dream for Ella may now become a reality.

East Calder Community Football Club have also donated their strips for the match and are also sponsoring the match ball for the GoFundMe page.”

When asked about his daughter, he said, “Ella is always smiling, though her Arthrogryposis affects her mood. She would love to be on that pitch, kicking the ball and joining in with her team-mates. It breaks my heart she can’t, hopefully one day.”

William ended with a message to people who are going to be attending the match and everyone who have already donated so far.

“To every single person who has shared, donated and supported my daughter’s fight to walk, from the bottom of my heart, I thank each and every one of you. Please continue to follow my daughters Facebook page, ‘Princess Ella’s Fight to Walk. Much love, William, Shannon and Ella.”