Dumbarton United edge out Broomhill BC 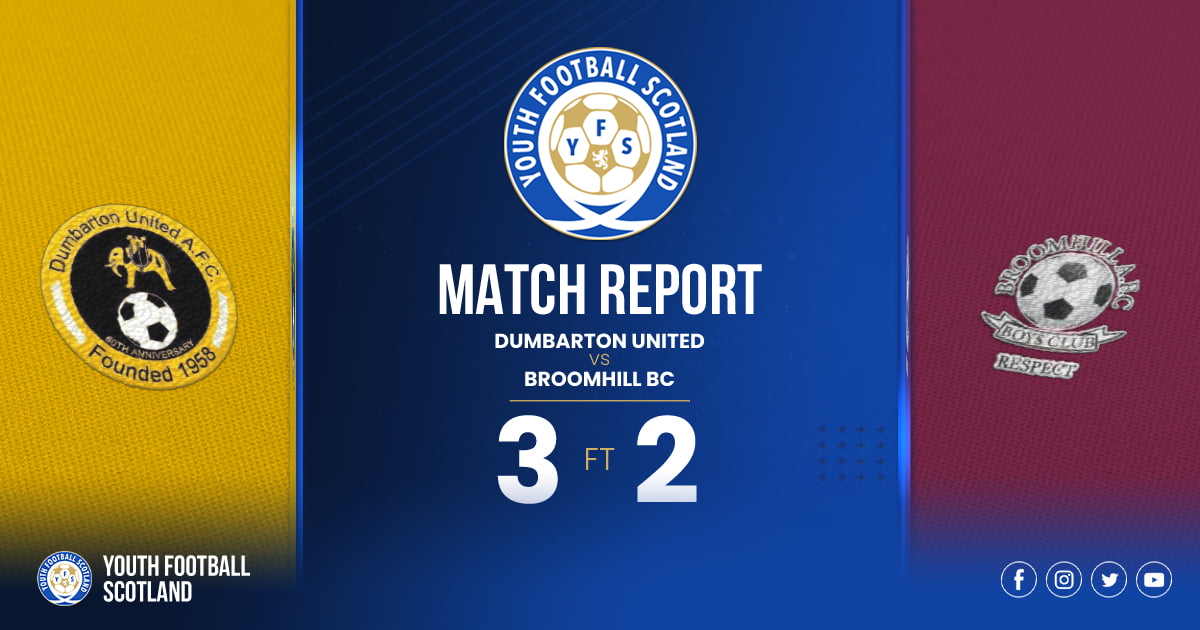 Dumbarton United U15’s came out 3-2 victors against Broomhill U15’s in both sides first game back for months, due to COVID-19 restrictions. The teams felt a feeling of déjà vu coming into the fixture at East End Park, as they faced each other when football returned last September, with Broomhill defeating Dumbarton United 7-1. Before the game United’s head coach Craig McAtear said his side were a much stronger team since that defeat:

“Ironically, our first competitive game after the first lockdown was against Broomhill.

“Unfortunately, that ended in a heavy defeat for us [but] I think we are in a much better place now than we were then though.”

Broomhill’s head coach, Gerry Bradley, said his side were just excited to be back playing football again.

“The team feel extremely eager and excited to begin competing and to travel outside their area.”

The game started quietly, with both teams having no clear-cut chances and neither keeper really being challenged. That all changed however in the 20th minute when Dumbarton’s captain Aaron Goldie opened the scoring with a simple finish from a free kick that was crossed into him.

This goal caused the visitors to begin to panic on the ball and make passing mistakes, giving away possession a few times, which eventually resulted in United’s second. Euan Tillery ran down the line and his simple finish went through the keeper’s hands to double the host’s advantage.

Half Time: Dumbarton United 2 Broomhill BC 0

The second half was a different story, with the away side starting in the driver’s seat. They quickly got a goal back in the 45th minute, with a corner crossed in being duly dispatched by Josh Simpson, making the game 2-1. However, their joy was short lived as 15 minutes later, a lax pass out from goalkeeper, Kieran Collins O’Neil, allowed Joe Longster to steal the ball away from him and score with an easy first-time finish.

The game continued in the back-and-forth manner as it had been all game, with no clear-cut chances for the next 15 minutes until Liam Conner, got the game back to within one goal, making it 3-2. Despite Broomhill’s best efforts that is how the game finished up and Dumbarton United avenged their heavy defeated last year.

The winning manager McAtear said he was delighted to see his team back on the pitch and performing after such an extended break.

“Despite the horrific weather, it was great to be back at the side of the pitch watching the team compete.

“It has been a long wait for everyone and we’re just looking forward to the coming weeks and months.”

Despite the result Bradley said it was a fantastic match, with all his players excited to be back playing as well.

“It was a great game of football despite the poor [weather] conditions, with all who played loving it.

“It was definitely beneficial with regards to the wellbeing of our young people.”

At the end of the game, United’s Sam Halliday was holding the ball in the corner and won the ball back after being fouled. This resulting in his teammates on the bench to run up to him and celebrate as if a 4th goal had just gone in. Then at the final whistle, all Dumbarton’s players were over the moon, celebrating with each of their teammates after such a tough year.

After the second goal from Broomhill’s Liam Conner which came from a confusing series of events, there was a clear mindset switch from the players, from the keeper to the striker, along with all the parents and coaches. The ball was pressed with the most intensity we’d seen in the game and the entire squad were up for getting an equaliser, although this eventually didn’t work out for them.

Scored a goal and lead the team in the middle of the pitch as captain, helping out his team to a solid victory with his leadership skills

Scored a goal and his creative presence on the pitch helped Broomhill pick up another, but sadly it was not quite enough to get anything from the game.