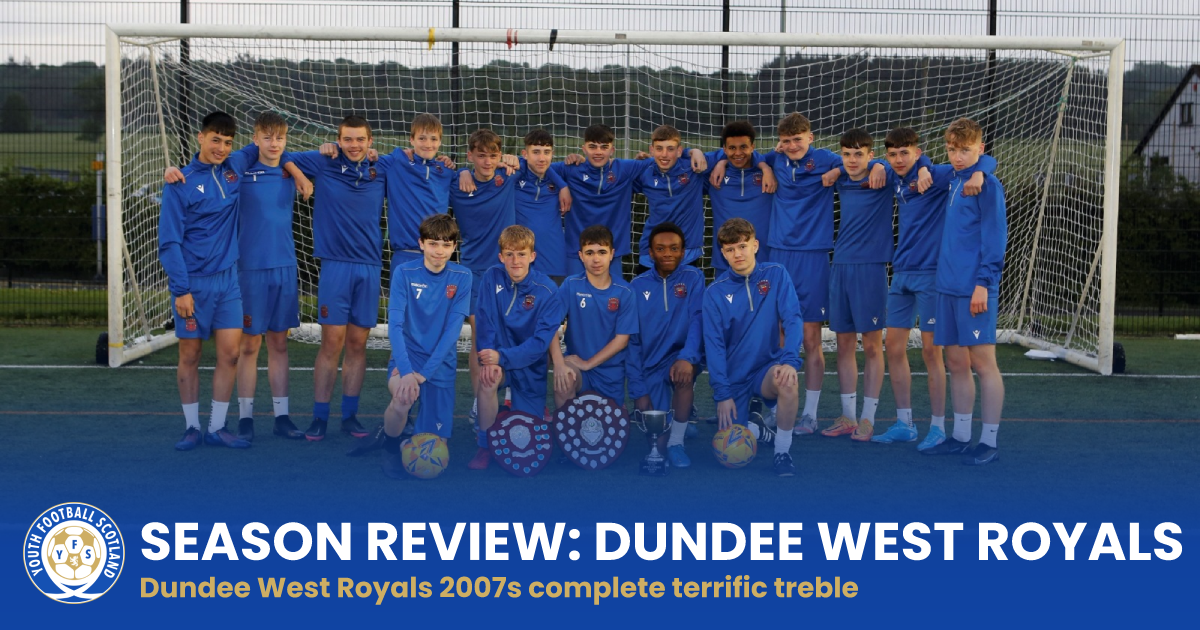 At the start of the season, Dundee West Royals 2007s had a burning desire to grasp success after their previous attempts at Cup victory had been hampered by restrictions. Through the work of coaches and players, the team ended the season with a stellar collection of silverware- winning the G Taylor League, as well as the Jean Pierre Babin Cup and the East Region Cup.

The success of the team prior to the cup victories was shown through an invincible 2-year unbeaten streak. Coach Paddy Dolan commented on the confidence of the team going into the campaign with the ambition to win the league title:

“We knew we were capable, having not lost a game in the previous 2 seasons, but ending them without trophies due to COVID cutting them short.”

With such a consistent record, there was a huge amount of pressure for the team to continue performing. When finally broken, in an away fixture to Lasswade Thistle in the Scottish Cup, the focus sharply turned to the coaching staff, and what words would be spoken to bring the boys back onto their winning streak. Dolan, while remarking that this was the most challenging point of the season, took the opportunity to improve the style of play within the team. He claimed:

“After the loss, there was a lot of reviewing areas that didn’t work in the game and going back to the things we knew we were good at. They have tremendous quality, so it was a case of reminding the boys of this, whilst also making sure that the standard had been raised. If we wanted to compete at that level, then we had to continue to work and improve.”

It is clear that the determination shown by staff and players can be attributed to the achievements of the team. When questioned on why the team were so successful, Dolan commented:

“We’ve always had a way of playing that we believe is the ‘right way’, so to speak. The boys work hard in training and are great at applying skills from practices into matches. Their attitude makes it easy for us as coaches to keep them both confident, but also grounded and aware of the hard work needed to maintain such high standards.”

A notable highlight of the team’s season was the decisive triumph over Blue Brazil in the East Region Cup final, with the Royals storming to a 10-2 victory. Dolan also claimed the team’s performance reached a zenith in the final of the Jean Pierre Babin Cup, which was won after putting several goals past their local rivals, in a 4-1 victory. The Royals remained unbeaten locally throughout the whole season, a great source of pride within the team. Despite the team’s success, Dolan was reticent to give individual mentions:

“Everything is won as a squad, with every player playing a huge part in the success.”

After 2 disrupted seasons, Royals had finally got their hands on silverware. Dolan continued:

“I think it was a mix of relief and of course, pride. Everyone was rightly proud of being unbeaten for so long. Teams in our area know that we have been strong for a long time but to finally have the trophies to back it up was a big thing for the boys. As coaches, it was also reassurance that what we were doing is improving the players and the team as a collective”.

However, winners’ medals were not the only accolades collected as several players received national attention:

“We have had a total of twelve players receiving Scotland recognition, either with the YFA Select Squad or the BGCS Scottish Select Squad. It was a huge honour for them to get such recognition. It is testament to the hard work that they put in to be recognised on such a level”.

The success of the team is further shown through the progression of players. A total of 4 players have now moved into professional academy set ups at Dundee United, Dundee and Montrose.

Looking forward, the coaching team have high hopes for what the team will go on to achieve. Dolan claimed:

“Our main aim for this group of players is to continue winning trophies, especially challenging ourselves against the very best in the country. We’d also like to get as many players as possible from our squad in different positions to further their footballing development. This season has been an unbelievable achievement from the team, which we can hopefully repeat, or even better next season.”

Everyone at YFS would like to congratulate the Dundee West Royals players and coaches on a truly remarkable season. Well done to everyone involved.