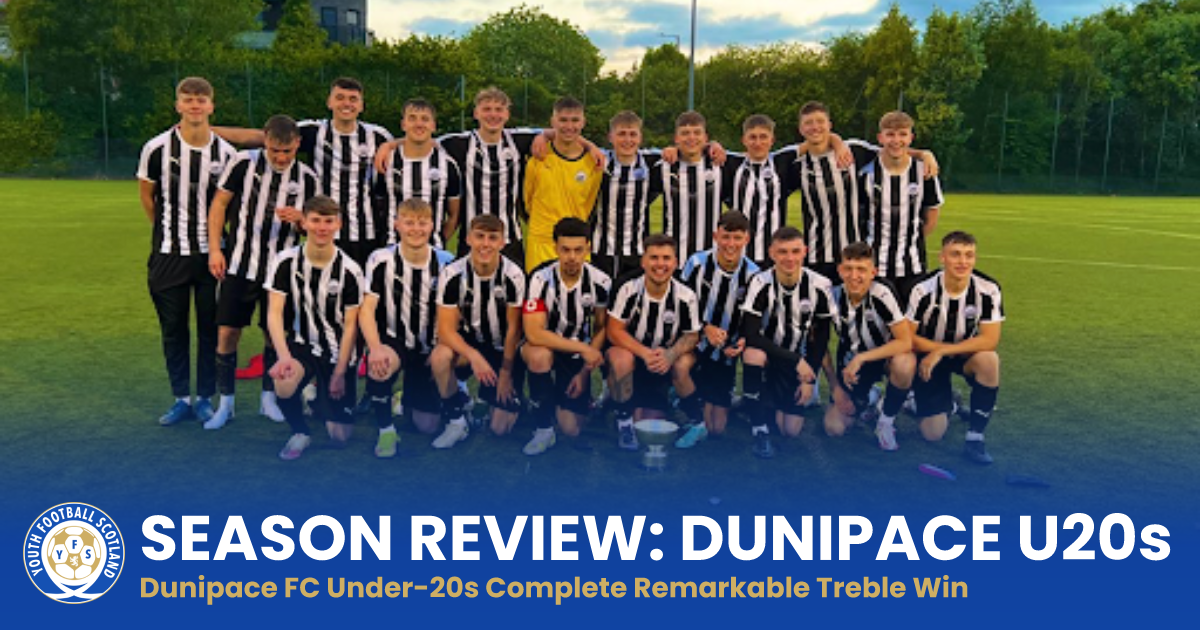 The 2021/22 campaign was one to remember for the Dunipace FC Under-20s, with Callum Tapping’s side winning a historic treble. Dunipace finished the season as league champions, winning the SLDFL Conference C, as well as adding the Challenge Cup, and Knockout East Cup to their trophy haul for the season.

“Individual and Collective Objective/Targets were set for the players and many of them have been achieved. All the credit goes to the players as they’ve set an environment and an atmosphere that people want to be involved in. It’s been a total pleasure having these players around me as a coach.”

Dunipace may have won the Challenge Cup, but it was almost all over in the first round against Ardeer Thistle. This was one of the most important moments of the season, with Dunipace 1-0 down 91 minutes in and hope fading, the team managed to equalise and then win the game on penalties. This kept the dream of the treble alive and showed the winning mentality that Dunipace had throughout the campaign.

This was one of the high points of the season, and Tapping recognised the importance it had. He added:

“It’s difficult to pick one (favourite) moment, however I would say our win over Ardeer in the 1st round of the challenge cup. Last minute equaliser and to then win on pens probably summarises the groups character. That game gave us the confidence that we could go right to the wire regardless of the situation. We went on to score 5 or 6 last minute important goals after this game.”

It was not all plane sailing for Dunipace, with arguably the biggest challenge faced being the victim of their own success. Plenty of the under-20 side have caught the eye of the senior team, with a host of young talents being brought up to play for Dunipace’s senior side from within their ranks.

This left the Under-20s short of bodies at times, with Tapping acknowledging this as a double edged sword.

“Throughout the season it has been tough for everyone at the 20s. We’ve been lucky enough to have a lot of the boys rewarded with 1st team football, which is amazing, but sometimes it has left us short as we didn’t have an u18 squad to bring players up, so we played many games with only 11/12 players available.”

The turning point of the season for Dunipace was their first defeat of the campaign, a 6-2 defeat to Preston Athletic in the Cup, which halted an outstanding run of 20 wins in a row. This defeat could have easily seen the team take a backwards step, but instead they used the disappointment as fuel to carry on and improve. Head Coach Tapping believes this motivated his team for success as he explained:

“The boys tasted disappointment for the 1st time that night and didn’t want to feel that again.”

Dunipace secured the first part of their treble with the league title. The Under-20s became League Champions in March, with a late win against Jeanfield Swifts. A 93rd minute winner ensured that Dunipace would win the game 2-1, and in turn confirm their league title win in dramatic fashion.

With the title already in the bag, the team pushed on for more glory, with the Knockout East Cup final in May against Civil Service Strollers. This would be a tough test for Dunipace, but they were cool under the pressure. Dunipace were leading 2-1 in the 91st minute, until Civil Service Strollers grabbed an equaliser. The Under-20s did not let this phase them though, showing incredible character to pick themselves back up and score a 93rd minute winner to be crowned champions, adding their 2nd trophy of the season.

The treble was now well within their reaches, with just 1 game in between them and their goal. Bonnyrigg Rose stood in their way in the Challenge Cup Final, and it would prove to be a very difficult test. Dunipace showed their incredible winning mentality once again and won 2-1 on the day, completing their historic treble by becoming Challenge Cup winners.

This was a fitting end to a sensational season for Dunipace Under-20s, who defied the odds to win the treble. Tapping was incredibly proud of his squad, saying:

“To win a treble at any level is amazing but we set goals and objectives at the start of the season and to win 3 trophies was one, saying it is one thing, but for the players to then go and produce it, is ridiculous.”

It is an exciting time for the class of 2021/22, with 17 of the players in the squad making appearances for the senior side during the season. Every single player has some form of contract for next season, with some staying at Dunipace – graduating to the senior side – with a handful signing deals with sides in the lowland league.

Everyone at YFS would like to congratulate the Dunipace Under-20 players and coaches on a truly remarkable season. Well done to everyone involved.