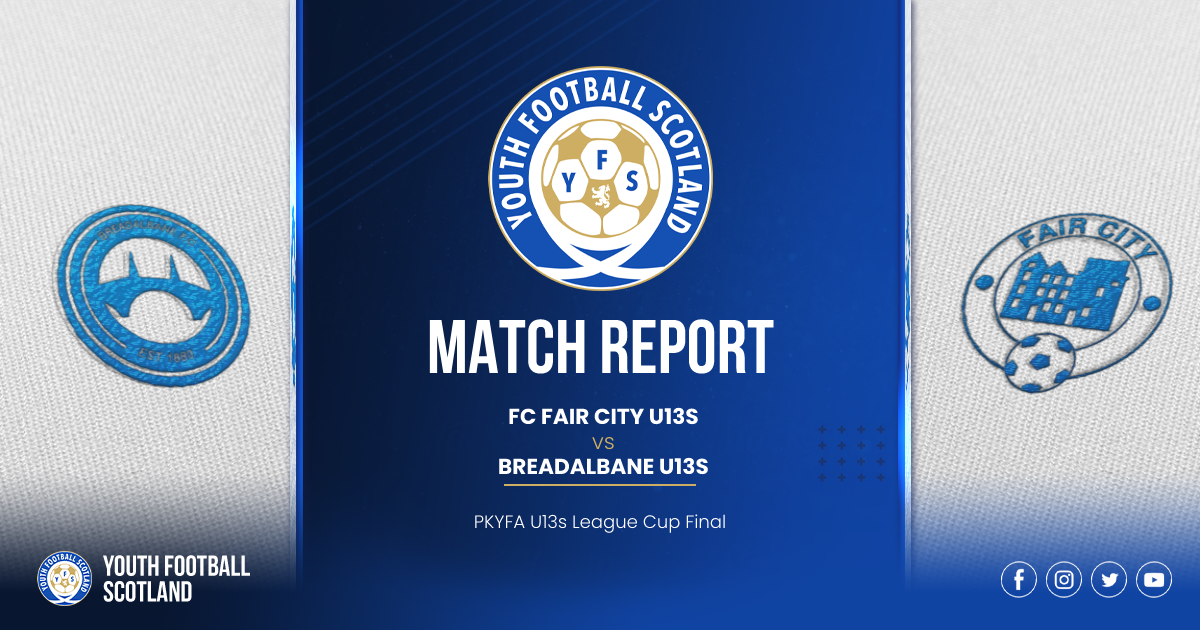 The Perth and Kinross YFA Cup Final took place at the Davie Park Stadium, with Fair City facing Breadalbane. The match was fiercely fought on both sides, such that the game ended in penalties. It was Fair City who came out triumphant, lifting the cup in front of their families.

The first half was goalless, yet end to end, with all the players desperate to put their team in the lead. However, Fair City flew out the traps beginning the second half, with 2 early goals putting them in a firm lead. Breadalbane valiantly retaliated, with 2 goals late in the half, ensuring the result was determined on penalties. Despite the tangible nerves on both sides, Fair City remained composed, striking the back of the net 3 times, enough to become champions.

The heat in Blairgowrie was oppressive, and the stakes were high, however the players and coaches appeared relaxed ahead of kick off. From the opening whistle, both teams attempted to make an impact on the game, with shots from both ends going wide within the first 5 minutes. The first proper chance of the match was five minutes in, from Fair City’s Cameron Duncan, who after gaining possession, charged down the wing, and produced a curling shot, comfortably stopped by Breadalbane’s keeper. Breadalbane were quick to retaliate, with Reece Da Silva picking the ball up from just outside the box and firing a shot in, catching the side netting in the sixth minute.

Perhaps the closest chance to breaking the deadlock was from Breadalbane in the 25th minute. Beautiful link up play from the team led to George Mallia producing an inviting cross into the box for Ben Davies, who could not quite get on the end of it, failing to hit the back of the net. The draw continued.

The first half had concluded, with both teams battling for possession throughout the duration of the half, with several half-chances. The break was welcome, with the combination of the heat and the intensity of play taking its toll.

The second half began, and Fair City began a rampant attack on Breadalbane. In the 37th minute, Duncan broke away from the defence, striding down the right wing, and pulling the trigger for a shot at goal. However, the powerful strike was cushioned by the Breadalbane keeper, denying Fair City the lead.

Unrelenting, Fair City continued to dominate play, and search for the opening goal. In the 40th minute, Teddy Hughes launched the ball into the box, however the shot was deflected off the keeper. Hughes persistently chased the opportunity, getting on the end of the rebound, and tapping the ball into the back of the net. Fair City finally had the lead which they had been searching for.

The situation went from bad to worse for Breadalbane, when Fair City continued to seek another goal. The untiring Duncan continued to break through the defence, charging down the wing and firing a shot which went past the keeper and left the net rippling. Fair City now had a comfortable lead and their eyes on the cup. Or so they thought.

Breadalbane were hungry for the win, and soon the narrative of the game changed, with Fair City losing what seemed to be a firm grip on the match. In the 58th minute, Breadalbane

took advantage of this, with a powerful corner from Thomas Donaldson-Smith being fumbled by the keeper. With the ball still alive, Donaldson-Smith managed to scramble the ball into the back of the net, followed by an eruption of celebration from the fans. It was all to play for, and Breadalbane were hungry for an equaliser.

The opportunity for an equaliser came late on in the game, when Reece Da Silva was brought down in the box by Fair City’s Klaudiusz Suchanek, receiving a yellow card for the foul. The referee pointed to the spot, and all eyes fell on Finlay Da Silva.

Unfazed, Da Silva stroked the ball to the centre-left of the goal, past the keeper. Breadalbane had valiantly fought for the draw, and in the dying minutes of the game, it became apparent penalties were required to separate the teams.

The final whistle blew, and the teams gathered, deciding the penalty takers. After an intense penalty shootout which saw Fair City emerge victorious, the stadium erupted in cheers from players, coaches and families. Fair City had won the cup.

In a tense showdown of two teams, the quality of play was high. Breadalbane looked dejected at full time, despite their resolute retaliation, City had their hands on the silverware. The start of the second half was where City began to take control of the match, and despite Breadalbane equalising, they maintained composure. This clinical coolness was continued through the penalties, where Fair City did not crumble under the pressure, rather, thrived under it. Both teams fought hard, yet due to the sheer determination and composure of Fair City, they lifted the Perth and Kinross YFA Cup.

Player of the Match

Both teams performed strongly, however the determination, pace and desire for the win was especially noticeable in Fair CIty’s Cameron Duncan. His composure in the box, and his pace when carrying the ball was a large component to the success of the team.

The performance of Breadalbane’s Thomas Donaldson-Smith was also noteworthy, appearing untiring and determined throughout the match, always chasing opportunities to put his side in the lead.