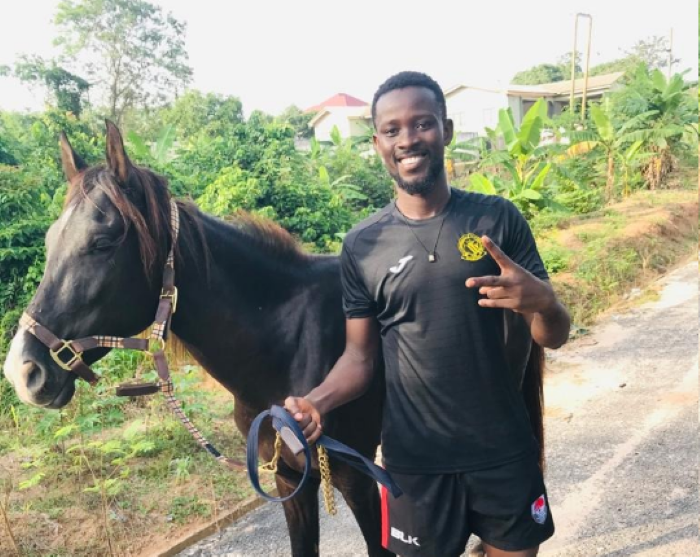 Now, at YFS we wanted to do some digging and find out just how on earth a Hutchison Vale top ended up in Ghana.

We managed to talk to the Aston Villa fan wearing the Hutchison Vale top, Kenneth. He said “the top was a gift for the football team to wear in matches.” Kenneth went on to talk about how he was told to look up Hutchison Vale he said “We were told that if we want to improve we should look up Hutchison Vale talent factory. Kenneth said that it was effective and as a coach it helped him develop his skills to help the players. I am the head coach and I research the Talent Factory (Hutchie) to help the football team improve.”

Finally, I asked Kenneth if he would like to come over to Scotland and visit Hutchison Vale Football Club, He said “I would love to come over and watch or even play against the football club.” Kenneth talks really highly of Hutchison Vale and is clearly a big admirer of the club and its qualities.

We also managed to chat to Les Trotter, 2004s coach, about the top in Ghana. He said “I got sent the video online. I thought it was great to see a Hutchie top on the other side of the world.” Les went on to say, “We as a football club have been giving tops to African countries for over 10 years now as we have connections in different countries over there.”

He went on to say how the tops that they send over are good quality and they would never send over scruffy or tops that are in bad condition. I also floated the prospect of Hutchison Vale Meeting or even playing against Kenneth’s team and Les said “That would be great! It is something that we will definitely look at once normality has returned. I don’t know where it would be but it would be great to welcome them here in Scotland.”

Tam Smith, The Hutchison Vale chairman said: “It was a great piece. I got sent it from several people after the Villa v Arsenal match, great to see the Hutchie top in amongst this happy group of Villa fans. It’s brilliant. The club is happy to give them more kit if they need it the club are always keen to help the greater football family, wherever they are.”

We think we can all agree that it is just great to see a local Edinburgh football team have a team wearing their kit in a different continent and we’re sure that there are many more stories that we just haven’t heard about.