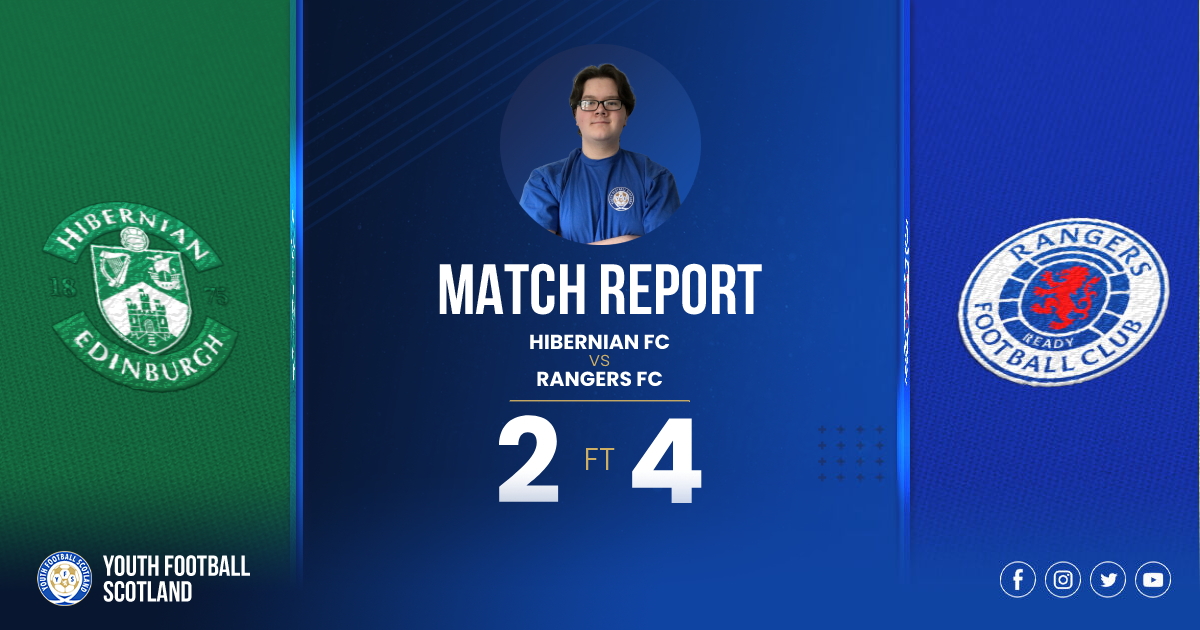 On a cold, dreich night under the lights at the Hibernian Training Centre, Rangers prevail late in the Scottish FA Youth Cup Semi-Final.

Both teams came into this game beating strong opposition, our hosts triumphed over Celtic FC in a 1-0 win, which wasn’t flattering to how they played that night, and the visitors beat Aberdeen FC 4-1.

From the get-go, both teams were raring to go, and, almost immediately, Hibs were given a penalty which Josh O’Connor slotted away.

The game was end to end after the opener, this lead to good chances for both teams but 19 minutes in, after a ball was sent in and scrambled about, a failed clearance fell right to Rangers’ Charlie Lindsey who comfortably sent it past the Hibs number one.

Within the space of about 6 minutes, 3 yellow cards were brandished by the referee, proving the amount of fight both teams still had in them.

36 minutes in and the Hibs goal scorer, Josh O’Connor picks his second goal, not bad for your 18th birthday. This time he gets the ball around 30 yards out, turns and hits it low past the Rangers keeper.

From then on out, into half time and for most of the second half, nothing notable happened, there was the odd strong chance for both teams where it looks plausible that Hibs could extend their lead or Rangers could equalise, but with 16 minutes left on the clock, substitution James Graham equalises for the visitors.

For the seven minutes after the equaliser, it could’ve gone either way, but captain fantastic Robbie Ure climbs the ladder and grabs the winner, or what he must’ve thought would’ve been the winner, for Rangers. Ure, who had a strong game up until that point but had no flashes of scoring, but when he scored one, he got another. Two minutes later, he climbed back up that ladder and grabbed the game-sealing goal.

Commiserations to the Hibernian youth team who bow out of the tournament after a terrific run to the semi-finals after beating Celtic youth, Lothian Thistle Hutchison Vale and Montrose FC.

Congratulations to Rangers as they progress on to the final to play Hibs’ cross-city rivals, Hearts.