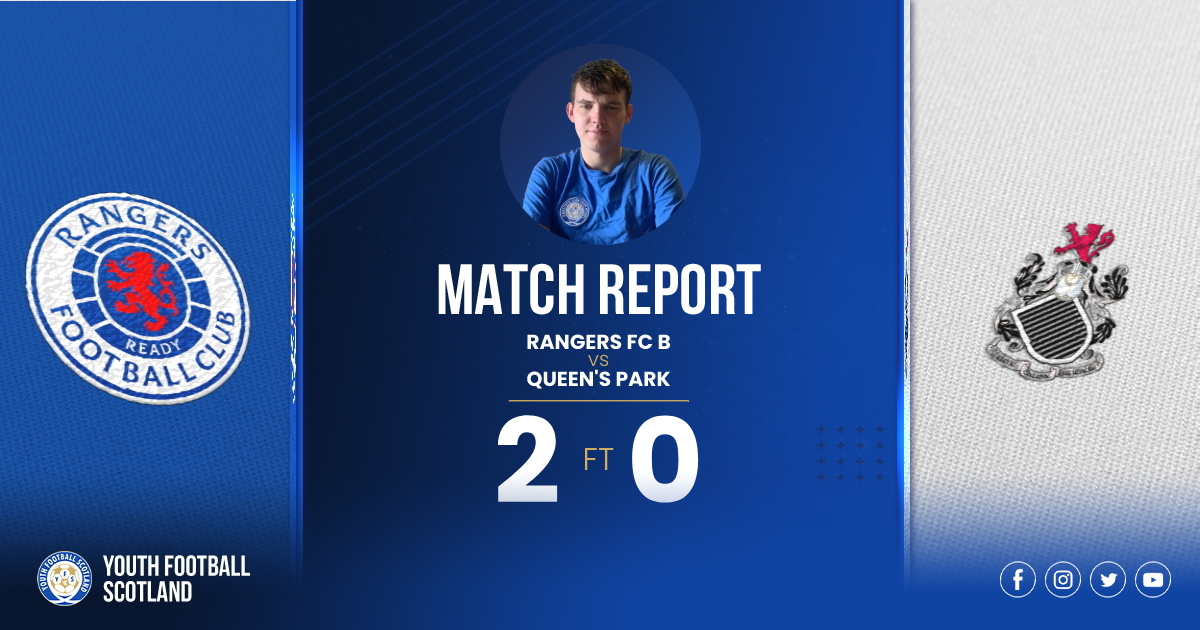 Rangers B secured top spot in the City of Glasgow Cup group stage after a comfortable Tuesday afternoon, win over Clyde at the Rangers Training Centre.

The first half ended goalless after Queen’s Park midfielder Ronan Darcy’s penalty was saved by Jay Hogarth, but a quickfire double from substitute Tony Weston in the second half ensured the victory for Rangers.

After a fairly even start it was Queen’s Park who had the first chance of the match in the fifth minute. Darcy slipped the ball down the left wing to Jai Quitongo, who dribbled past Mateusz Żukowski into the box, but he saw his cut back turned behind. The resultant corner was cleared, but Queen’s Park continued on the attack and the ball fell to Darcy on the left wing. The midfielder drove to the edge of the box but saw his curling shot towards the bottom left corner met well by Hogarth, who tipped it onto the post. Jake Davidson was in quick on the rebound but somehow saw his five-yard shot cannon back of the cross bar. The linesman raised his flag for offside, however, sparing the defenders blushes.

Rangers B nearly made them pay two minutes later and should have taken the lead themselves. Robbie Fraser took the ball down the left wing and played a low cross straight to Cedric Itten, but the first-team striker scuffed his shot straight at Jacques Heraghty.

In the 9th minute, Itten was played through again and rounded the keeper but captain, Charlie Fox, positioned himself well to clear the shot off the line. The ball rebounded to Charlie McCann, but the Gers midfielder could only shoot straight at the keeper.

Rangers B began to take control of play without making any real clear-cut chances. In the 17th minute captain, Fraser, floated an in-swinging ball towards Kyle McClelland at the back post but the defender could only header straight into the keeper’s hands.

At the other end, two minutes later, Scott Williamson made a darting run towards goal but his shot towards the bottom left corner was held well by Hogarth.

Itten had another chance to put Rangers B in front in the 21st minute after some good play from his side. Alex Lowry produced a lovely flick to McCann who played a nice one-two with Cole McKinnon before slipping the Swiss striker through on goal, but Itten failed to keep his shot below the crossbar.

In the 29th minute Fox launched the ball over the Rangers B defence into the path of Quitongo, who cut inside Żukowski but could only produce a weak shot straight at Hogarth. The Gers went straight up the park on the counterattack, but Arron Lyall’s shot was held well by Heraghty.

With only four minutes to go till half-time, a mistake from Rangers B almost gifted Queen’s Park the lead. Greig Allen’s short pass to Żukowski was cut out brilliantly by Quitongo at the halfway line. The Queen’s Park winger darted down the line at speed and drove into the Gers box to be hauled down by Allen, giving referee, Sean Murdoch, no option but to point to the spot and produce a yellow card.

After his man of the match performance in Queen’s Park’s last Glasgow cup match, Darcy was expected to put his side in the lead, but the midfielder on-loan from Bolton Wanderers saw his penalty saved magnificently by Jay Hogarth, who dived down to his bottom right corner, blocking the shot. Williamson ran in for the rebound but could not beat the Rangers keeper from a tight angle, effectively drawing conclusion to a goalless first half.

There was a steady start to the first half with both teams taking a while to create any clear-cut chances in the opening exchanges. Substitute Adam Devine received the ball in the 56th minute and passed it down the left-wing Lowry. Devine overlapped the midfielder and ran onto a lovely, chipped pass but fired his shot wide of the right post. Lowry created another chance three minutes later laying the ball back to McCann at the edge of the oppositions box, but he could not keep his shot on target.

The turning point in the match came just after the hour mark when Itten made way for 18-year-old striker Weston, and it only took three minutes for the scouser to open the scoring. Lyall passed the ball down the right wing to McKinnon who saw his shot saved well by Heraghty at his near post, but Weston pounced on the rebound, firing into the empty net.

Rangers B nearly doubled their advantage in the 66th minute after a brilliant counterattack from a Queen’s Park corner. Lyall heel-flicked the ball deep inside his own half to Lowry who arrowed his pass beautifully through the spiders’ defence to the on running Weston. Weston passed the ball into the path of McKinnon, but the midfielder’s shot was turned behind well by Heraghty.

The Gers did get their second four minutes later though with a goal that could have easily been prevented. McCann ran from deep towards goal, drawing a reckless trip from Davidson at the edge of the box. Ross McCausland’s free kick deflected off the top of the wall, falling inside the six-yard box to be met by the sliding Weston, who knocked the ball past the helpless goalkeeper.

Rangers B saw the game out well without allowing Queen’s Park any more chances of a comeback. The Gers did continue to attack in search of a third but other than a couple shots off target they did not ever look like extending their lead.

Overall, it was a well-deserved win for Rangers B, whose professional performance guaranteed their place at the top of the group and ensured a hypothetically easier, semi-final tie against whichever team finishes forth. Queen’s Park visits Clyde next Wednesday in the final game of their group campaign knowing a win will result in a second-place finish for the Spiders.

Goals win games and Weston duly delivered. Despite only playing half an hour, the young striker’s clinical prowess proved the difference in gaining his side the victory.