Hoops fight back to hold Spiders in thriller 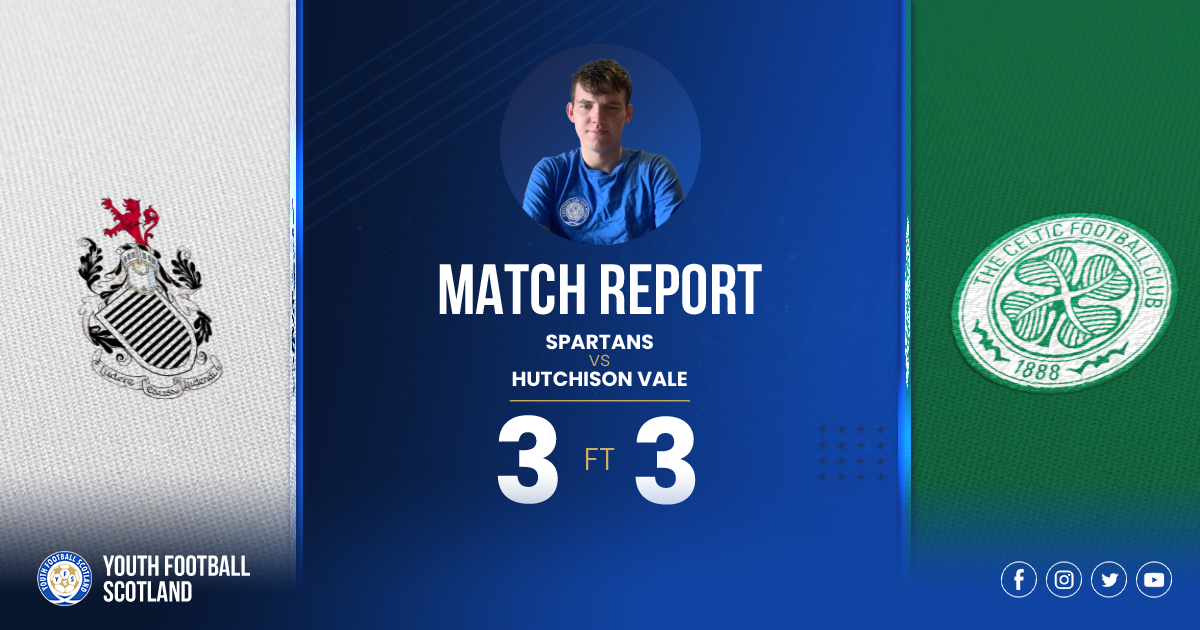 The everchanging conditions made way for an enthralling encounter at Newlandsfield Park – home of Pollok FC – as Queen’s Park and Celtic B came away with a point each in the City of Glasgow Cup group stage, after a thrilling 3-3 draw.

Joey Dawson opened the scoring for Celtic B in the first minute, but their lead didn’t last long as Ronan Darcy curled in his side’s equaliser soon after. Jack Thomson gave Queen’s Park the lead from the penalty spot, a lead which was soon doubled by Scott Williamson. The spiders could not see out their half time lead however, as Celtic scored a penalty of their own, through Karamoko Dembele, before substitute Tsoanelo Letsosa produced a spectacular equaliser in the last minute of the game.

It was a horror start for Queen’s Park. The ball was passed back to Jacques Heraghty in the Queen’s Park goal, but Dawson closed him down brilliantly. The striker dispossessed Queen’s Park’s keeper and chipped the ball into the empty net to open the scoring for Celtic B.

It was up to Queen’s Park to respond and that they did building attack after attack throughout the next five minutes. Williamson saw his effort saved by Tobi Oluwayemi before the Celtic keeper smothered a good ball through from Thomson, stopping the on running Darcy two minutes later.

Queen’s Park made the pressure count and got their equaliser in 7th minute with a piece of individual brilliance. Darcy robbed Celtic’s right back, Josh Dede, played a good one-two with Williamson, then curled his shot from the edge of the box into the bottom right corner – leaving Oluwayemi with no chance.

The game then settled, and Celtic began to get into their passing game.

In the 13th minute Dylan Corr lobbed a perfect ball over the Queen’s Park defence ahead of Dawson but the Celtic striker’s shot was blocked well by Heraghty. Queen’s Park replied with their own long ball two minutes later which Darcy took down with ease, but he could not keep his shot below the crossbar.

In the 18th minute, Darren Lyon won the ball in the centre of the park and passed it left for Darcy. The Queen’s winger slid the ball through to Williamson who saw his shot saved well by Oluwayemi, but Longstaff sprung onto the rebound rapidly before being hauled to the ground, leaving referee Sean Murdoch with no option but to point to the spot.

Thomson kept his cool and fired his penalty into the bottom left-hand corner giving his side the lead. The frustrated Oluwayemi did get a hand to it, but he could not keep out the powerful strike.

The next real opportunity came in the 34th minute when Celtic B won a free kick on the right wing 35 yards from goal. Dembele whipped in an inswinging free kick perfectly to Murray, but the Celtic captain could only head the ball into the arms of Heraghty.

In the 36th minute Oluwayemi breathed a sigh of relief after nearly costing his side another goal. The Celtic goalkeeper scuffed his clearance straight to Darcy, but the Queen’s Park attacker’s shot flew wide of the right-hand post.

It did only take another minute for Queen’s Park to double their advantage though when Williamson ran onto a high ball and lifted it over the Celtic goalkeeper to make it 3-1.

The spiders could have got another five minutes before half time after Darcy played Dylan Reid through on goal. He placed his shot towards the bottom left corner, but it was turned behind well by the outstretched Oluwayemi.

Celtic B should have pulled one on the stroke of half time after some brilliant running from Dembele on the right side. The tricky winger managed to beat his defender to give him space to pass the ball to Dawson who could only blast his shot straight at Heraghty.

Queen’s Park came out the traps quickly in the second half looking to kill the game off. In the 47th minute Thomson battled hard to win the ball in midfield passing it wide to Darcy. The winger slipped the ball through to Williamson, but his shot flew well over the crossbar.

Celtic B responded a minute later with a good chance of their own through Dembele who ran down the right wing before cutting onto his right foot but saw his shot go wide of the left post.

The end-to-end play seen in the first half continued well into the second which both teams trying to find that all important next goal. It soon came just before the hour mark as Celtic B won a penalty of their own through Dembele. The highly thought off 19-year-old charged down the left wing and cut inside only to be brought down by the sliding tackle of Jake Davidson, who was adamant he had won the ball. Dembele fired the penalty into the top right corner, leaving Heraghty with no chance, and halving the deficit to a single goal.

Queen’s Park were almost the masters of their own downfall in the 66th minute as Queen’s Park substitute defender, Charlie Fox, under hit his pass back to the goalkeeper forcing Heraghty concede a back-pass. Dembele touched the ball to Owen Moffat, but the wall stood firm to block the shot.

With ten minutes to go Celtic thought they had equalised. Dembele stole the ball at the edge of his own box and passed it to Rocco Vata. Vata played the ball out right to fellow substitute Ben Doak who drove down the wing quickly. He then played the ball across to Dembele, who had run the length of the field, but he saw his shot blocked brilliantly by Heraghty.

Celtic B fought ever so hard to get back into the game and finally got their equaliser in the 89th minute. Doak received the ball on the right wing, using his quick feet, created space for himself to pass the ball into substitute Letsosa who unleashed an absolute cannon of a shot straight into the top left corner sparking scenes of celebration from the Celtic bench.

Doak did have a chance to take the lead for Celtic B in injury time but his shot from the right-hand side went wide of the left post.

In the last minute of stoppage time Queen’s Park won a free kick about 30 yards from goal, which Biggar could only fire into the wall.

Overall, Celtic B will be the happier of the two sides after coming back from their half time deficit, but I think its fair to say that a draw can be considered a fair result. This result moves Queen’s Park to the top of the table as they prepare to host Rangers in their next round of fixtures.

The left winger scored a tremendous goal for his side early on and showed his creativity well throughout the match almost driving his team to a victory.

In a similar sense to Darcy, the Celtic wide man was involved in absolutely everything for his side, topping off his performance with a terrific goal from the penalty spot.