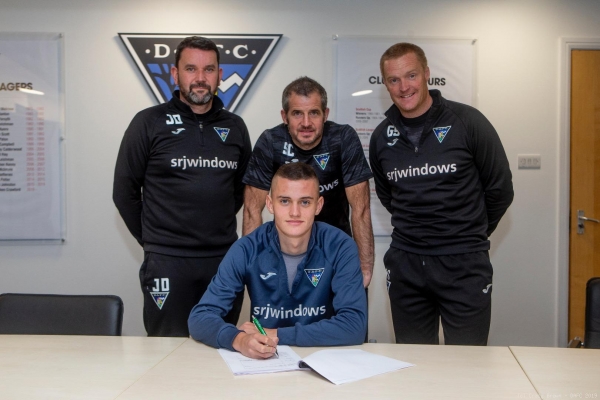 With so many great young talented full-backs coming through the ranks in the Scottish game, there is healthy competition for who can move from their respective academies to play in some of the top leagues in Europe.

Players such as Andy Robertson, Kieran Tierney and more recently Aaron Hickey have all worked hard to earn their opportunities and are living the dream.

Along with previous full back Hot Prospects mentioned by other reporters (Josh Doig, Leon McCann, Josh Reid) having great ambition to succeed in football, 16-year-old Dunfermline full-back Miller Fenton is no different.

Miller, who attended Queen Anne High School in Dunfermline, signed his first professional contract for the Pars in November 2019 and has been involved with Dunfermline’s reserve team ever since.

Miller started his playing career at Elgin Star 2003s, where he spent many years playing 7-a-side and then proceeding to 11-a-side. With Miller being a real stand-out in this Elgin side, he then was scouted by Fife Elite who he impressed the previous season.

Miller spent around 3 years playing for Fife Elite in a pro-youth program against the country’s best youth talent before getting a real chance to prove himself in the SPFL Reserve League at the age of 15 for Dunfermline.

In a recent interview with Miller himself, he stated that since signing for the Pars, coaches Stevie Crawford, Greg Shields and Jason Dair have been instrumental in his recent development as a player.

“They have all been great…they are very easy to approach if you have any problems or questions. They demand the best out of me and praise me when it’s due…they always expect a high standard from everyone…always giving me tips on how to defend…since coming in full-time I’ve become a much better player.”

A game that stands out in Miller’s young career so far was a reserve game against Celtic back in October 2019. Having just turned 16 a few weeks prior to the match, Miller was given a golden chance to prove himself.

Going into the game, Miller already knew he was going to have a real task on his hands against a strong Celtic side – but to make things more difficult for him he had to mark one of Scotland’s best young talents; Karamoko Dembele.

After a 1-0 defeat at East End Park, Miller picked up Man of the Match in the eyes of coach, Greg Shields, who was very impressed by Miller’s performance.

Shields noted after the game: “To play someone who just turned 16 last Wednesday, it excites me. He did really well playing against Dembele. I thought he snuffed him out…he can hold his head high cause he was outstanding.”

Miller commented on playing against Dembele: “I had played against him before so I had an idea of what he was going to do…I was ready to do anything to try stop him…I just treated it like I was playing against any other winger.

Following on from this great individual performance, Miller continued to impress in the Reserve league before he gained himself a place on the Dunfermline first team’s bench on multiple occasions.

After the 19/20 season was cut short due to COVID-19, Miller will be looking to impress manager Stevie Crawford during pre-season in the lead up to the start of the Betfred Cup and the 20/21 league campaign.

“My goal this season is to play, it’s the only way I’ll get better,” he said.

“I’m ready to play and also ready to fight for the left back position…if I work hard enough and impress I’ll get game time.

Miller’s aspirations for the future indicate what he wants to achieve in the game he loves: “I think everyone’s dream is to get a national call up at whatever age…I just take it as it comes and will wait and see how the upcoming season goes.”

With the same attitude and determination that Miller has had since the moment he started playing football, this writer has no doubt that the left-back will eventually break into the Pars first team and be a stand out within it.

(All images credited to dafc.co.uk)