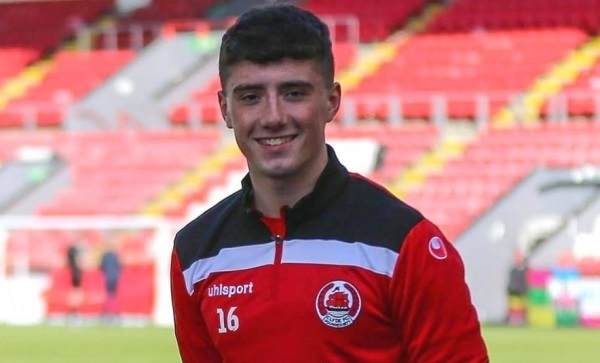 Clyde have added another promising youngster to their squad for the upcoming season, teen’ midfielder Lloyd Robertson. Matthew Muir reports.

Born on 13 January 2001, Robertson went to Aberdeen Grammar School as he worked his way up the youth system at the Dons’ while also graduating from their Academy and securing a place in Paul Sheerin’s reserve squad until his release in June of this year.

On Robertson’s graduation from the AFC Youth Academy in 2018, Head of Youth Academy, Neil Simpson said, “Lloyd can play right back, centre back or in midfield. He is a very composed player, a good user of the ball, reads the game well and is a very solid defender.”

Under the management of Paul Sheerin, who played for the Dons’ between 2002-2004, Robertson was part of the side who narrowly missed out on the Youth Cup Final in 2019, as they got knocked out at the semi-final by Rangers.

After being released from the Reds, 19-year-old Robertson has now signed for the League One side having put pen to paper on a one-year-deal on Sunday.

Robertson has already been part of silverware for the Cumbernauld side as they lifted the first-ever inaugural NLL Broadwood Cup this weekend, beating St. Mirren Colts and Stirling Albion to be crowned winners.

On signing Robertson, speaking to the Clyde FC website, Bully Wee boss, Danny Lennon said: “We are pleased to have signed Lloyd from Aberdeen. He is a player we believe has a great deal of potential to develop into a quality defensive midfielder, while also being equally comfortable playing in the back four.”

Lennon concluded by saying: “We look forward to continuing his (Robertson’s) football education and harnessing his energy here at Clyde.”

We wish Lloyd and all at Clyde well for the upcoming season!

“I’m a pest!” Carol Baxter opens up on Grassroots Awards win
Five Things You Might Have Missed This Week