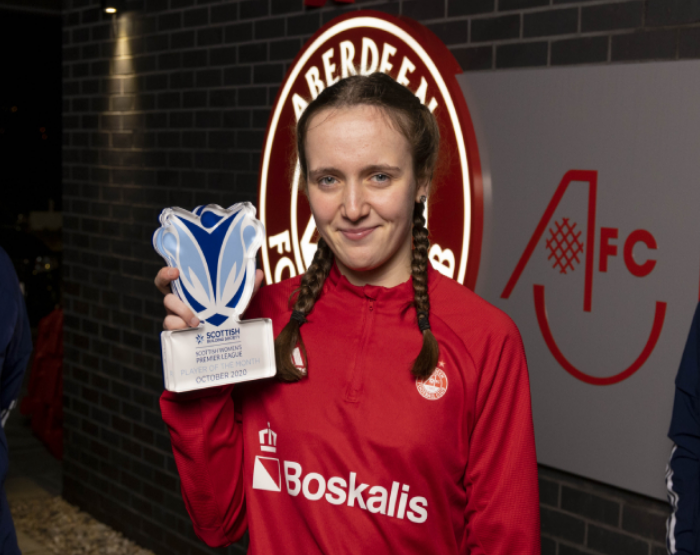 Aberdeen striker Bayley Hutchison has just won Scottish Building Society SWPL Player of the Month for October 2020, this is her second time winning the award, she is just 17 and last won the award in October 2018 when she was just 15.

This season Bayley has led the line for Aberdeen and helped them get off to their perfect start. When asked about if the team can carry on this great run of form and go unbeaten in the press conference, she said:

“It’s too early to say, we want to do as best as we can in the league but anything can happen, we are not going to be perfect, no team is, but if we just keep our mindset strong, and we don’t get too complacent, then we will be alright.”

Aberdeen’s perfect start to the season includes 28 goals striking the back of the net whilst conceding only just 5 goals. Hutchison scored 4 goals in October, including a hat trick in a 9-0 win over freshly promoted Boroughmuir Thistle, a late equaliser to help the team get the victory against Dundee United. This hot streak carried on into November when she got 5 more goals to her name. Aberdeen are now sitting pretty, six points clear at the top of the table.

With a 17 year old winning this award, previously doing so as a 15 year old, this really is a testament to just how good the Aberdeen’s youth structure is, and with just how big of a club Aberdeen are in the Scottish football hierarchy. When asked about this she said: “Aberdeen are a very good team, many players come from Aberdeen and go to play down in England, I think it’s just hard work mainly, a lot of players want to work hard to get there. I’m with Stuart [Bathgate], a really good coach and he knows what he is doing and know how they want us to play.”

In addition to Hutchison’s SWPL Player of the Month successes, she has built up an impressive CV at such a young age. She burst onto the scene as part of an Aberdeen FCL Under 12 side that progressed all the way to the Under 13 SWF Youth Cup final. She stole the show with a hat-trick in the semi-finals against Hearts, (click here to reach the match report) before leading the side out at Toryglen, where they finally came up short against a top class Glasgow City side. Also playing in that Aberdeen side was fellow award finalist Pollard.

She was then selected for the Scottish Schools FA’s international squad at Under 15 level in 2017, before progressing to the full Scotland setup the following year. She made her debut against Spain for the Under 16 team and has secured 15 caps for her country since. Prior to the pandemic she was in a rich vein of form for her country, with four goals in five games for the Under 17 age group.

With this youthful Aberdeen team, we wouldn’t be shocked if you see them battling for success in the future. Congratulations to Bayley for winning the award and best of luck for the season ahead.