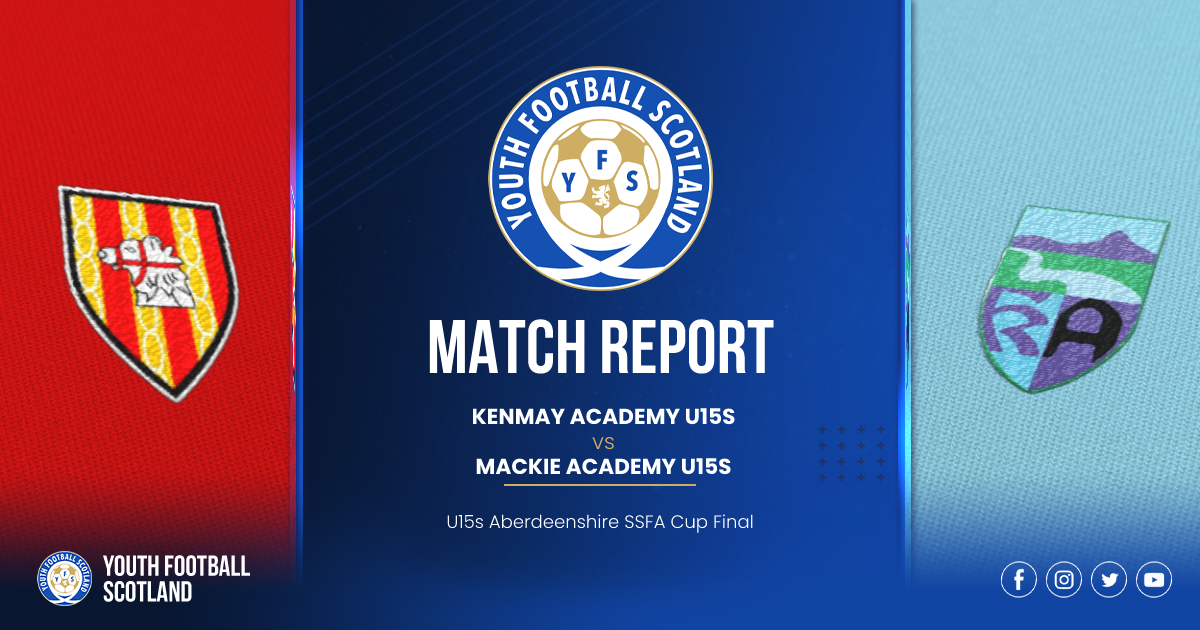 Kemnay Academy U15s grabbed the Aberdeenshire SSFA Cup with a 7-2 win over Mackie. A game which sounds on paper like a one-sided affair with Mackie enjoying occasional flairs but the cup-final offered two sides playing at a high intensity with Kemnay being more streetwise and clinical in front of goal.

Mackie almost had the dream start on this lucrative occasion, the Lawsondale 4G surface at Westhill is a bowling green and allows every opportunity to play front-foot, accelerating football. That almost ended in calamity for Kemnay after a minute with a Blair Watson pass-back to his goalkeeper, fortunately, squeezing past the post for a corner and not finding it’s way goalward.

There was no barking or ranting from the Kemnay PE manager, who was referred to by a colleague as “Fergie.” The world-renowned manager was known for showing resilience to win some big games. The Kemnay statement started after 4 minutes, Rory Butchart smashing a lovely effort into the bottom left corner.

Kemnay maintained playing on the front foot with Reuben Skea and Daryl Whyte linking up well with each other in the forward areas. The latter found the net well which was a sore one for Mackie who showed good glimpses of play in the opening exchanges but some good intelligence play from Robbie Paterson’s team had the Garioch side 2-0 up.

Sam McCafferty, a man who impressed, and upon conclusion of the match, it appeared he was on the books of Inverness CT, has a bright future in the game. Very seldom with a save but plenty of kicks up the park, one in particular making it 3-0 Kemnay by finding Skea who dispatched well. Skea would then complete the half by scoring on 31 minutes.

The goals for Kemnay came in all different contexts, the 5th coming through a lovely strike into the roof of the net through Finlay McDonald. His instinct and showed talent throughout the evening, McDonald picked up a pass from Butchart before guiding home.

Mackie never gave up, doing their school proud irrespective of the circumstances that erupted in the game. Morgan Fotheringham then found Arran Butchart but McCafferty gathered with ease.

Plenty of star awards could easily be given out to both sides for good individual displays but a fellow P.E teacher at Kemnay Academy could easily have grabbed all the plaudits in a time when there’s a living crisis. One of the match balls went into the trees beyond the terracing at Lawsondale, up stepped the teacher who earned his payday and collected the football with precision.

Mackie enjoyed a period where their resilience, hard-work and determination was signed off with reward in reducing the deficit. Kobi Lambert saw a deflected shot hit the back of the net to set up an entertaining cup-final in front of the congregation of parents and friends.

When a team plays football on the front foot and expansive, you always like to see good goals come off, Finlay Murray dispatched a fine effort on 66 minutes when getting on the end of a Whyte ball before directing a header into the net beyond James Houston.

Charlie O’Connor completed the scoring, and ultimately, sealed the cup for Kemnay, knocking the ball home past Houston before Mackie made the contest a lot closer. Finlay Craddock’s with a lightning effort beyond McCafferty gave Mackie some hope but they fell just short.

Enthralling final played in the right manner and a real good advert for Schools football in the area.

After the match, McCafferty and captain Ben Smith said, “All the boys played well and we were good in the forward areas, we worked hard as a team and we’ve all deserved this.

“We have moulded well as a team, the majority of us play with Dyce which helps in terms of togetherness.

“Defensively, we did well and we couldn’t do anything for their goals.”