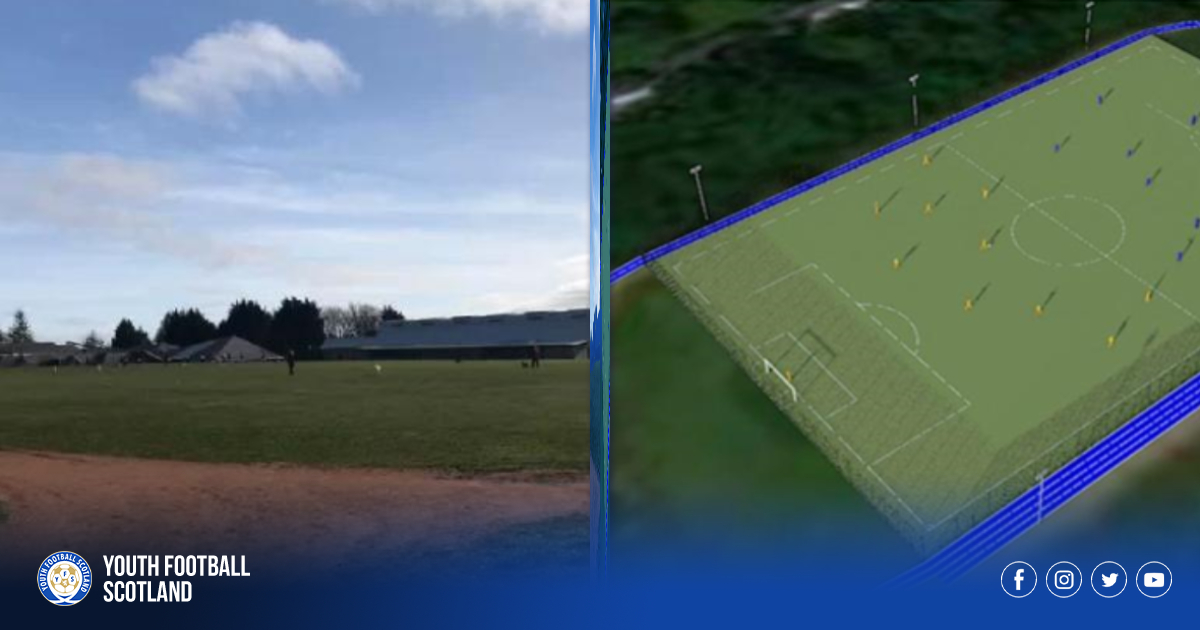 “We’ve got a single purpose and that’s to be the highlight of the week for the kids.”

This is the message of St Cadoc’s Youth Club, whose plans to create 2 brand new football pitches on the site of Crookfur Playing Fields are currently being considered by East Renfrewshire Council.

The club say the facility will give ‘perpetual access to everyone’ and provide a key service to not just to the nearly 1000 kids currently on their books, but to the community of Newton Mearns and beyond.

Encapsulating the community spirit of St Cadoc’s, Brendan Boyle, self-proclaimed janitor, is passionate about the project.

Brendan said: “What we do is of huge value to the community and the families in it.”

In their mission statement, the club set out detailed plans for the largely derelict playing fields, urging the community that ‘we can do better.’

SCYC said: “This proposal accords with East Renfrewshire council’s playing pitch strategy, and we are grateful for their support and the opportunity to enhance local sports provision and improve inclusively. All groups with pre-Covid lets will continue to be accommodated free of charge, as will the East Renfrewshire education department and all local Personal Trainers to ensure our fantastic new facility benefits our entire community.”

The club also want to offer playing facilities for basketball, netball, outdoor fitness classes as well as the introduction of an annual Highland games event in Newton Mearns.

And you better believe they have all bases covered. Brendan even knows that potential floodlights will produce 250 lux with a 3 metre runoff under their proposal. This was in response to a query about whether the lights would shine in a resident’s kitchen.

With so many young people being denied the opportunity to play over the last year, the club believes the playing fields application is more important than ever.

But due to lack of facilities, their waiting list is bursting with over 200 names. That’s 200 kids who could be improving their physical and mental health by exercising 3 times a week.

“We took more pride in what we were doing, without actually participating, because we saw much it meant to the kids when it was taken away,” said Brendan.

As the only youth club in the area that doesn’t have a trial system, it’s clear to see that a sense of belonging is at the heart of the team.

Brendan said: “Best in class. And I don’t mean football. In their development, everything that they do. It’s not really about the football.

“Whether it’s the top scorer or the last sub to be used. We’re all the one team.”

Not all youth football teams focus so heavily on development but rather pressure young players to believe winning is the be all and end all. SCYC have adopted a ‘one club culture’ and the kids are beaming every time they pull on the shirt.

“We’ve distanced ourselves from winning and focused much more resolutely on development and the kids are happier,” said Brendan.

One SCYC team secured a 3-3 draw after previously losing 14-1 to the same opponents last year, an achievement that shows the developmental journey of the players is paramount.

The club also enjoyed success in the Blackpool Cup, and despite having 8 teams registered, there was not a single goalkeeper available. Yet one young player, Cain, stepped up and heroically saved 2 penalties in the final to bring the trophy home.

These key moments in a young person’s life, where they have a sense of real achievement are invaluable.

But Brendan doesn’t talk about the victory, he emphasises the success of the trip.

He said: “Football is the means, but not the goal.

“The kids are going into the competition like Messi and they’re coming out it like Messi. It’s their club, not ours.”

At the end of the day, the club is a registered charity, with the aim to encourage public participation in sport. This is not lost on Brendan as when addressing the senior side, who now play in the West of Scotland league, he made it clear that the values instilled in the young players applies to them too.

He said: “You’re leaders of the community – not football players. Your job is to motivate and inspire 1000 wee guys.”

Despite all the club activity, they are still keen to host a blockbuster summer camp for kids to enjoy almost 7 weeks of interrupted football, should current covid restrictions stay in place, after a successful camp in Easter attracted 1500 children to come along.

Brendan says offering this service benefits the children and the families they come from, and he hopes this will encourage more people to get active.

He said: “For kids into football, apart from ice cream and chips, there’s not much better than that.”