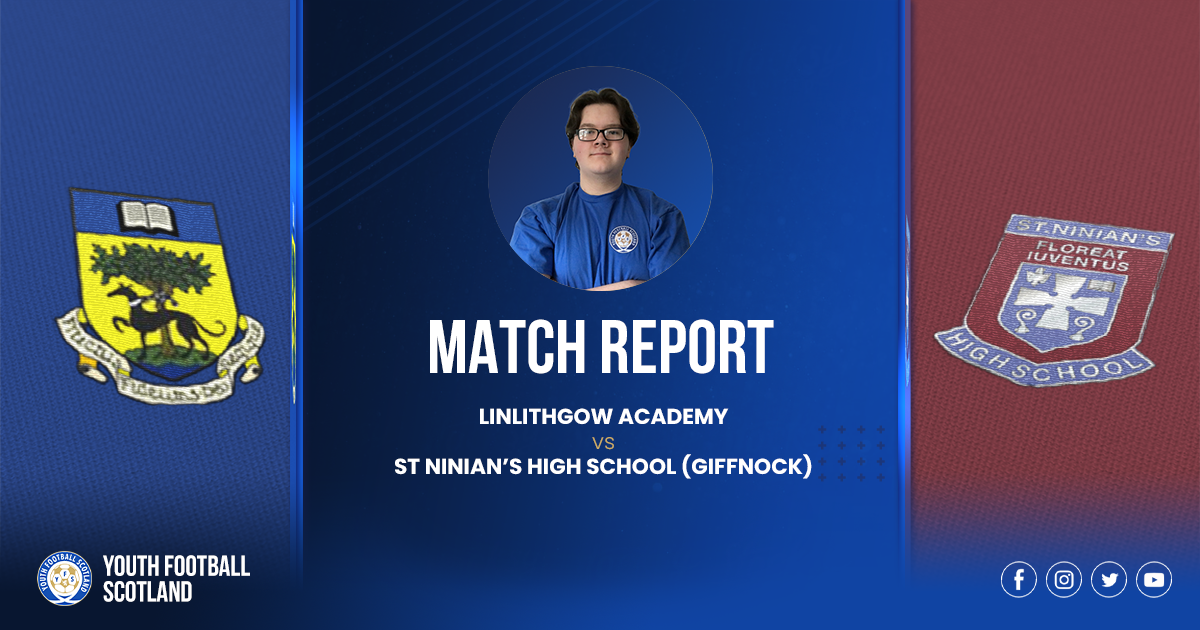 Linlithgow’s road to the final opened with an 8-0 win over Edinburgh’s Gracemount High School in the second round, a closer affair in Edinburgh was their third round game, a close 2-1 victory over Balerno moved them onto the fourth round where they triumphed over Our Lady’s High School Cumbernauld on penalties after a 1-1 score line in the opening 90, they went onto beat St Ninian’s Kirkintilloch 1-0 away from home, another penalty shootout saw them beat Jordanhill School in the quarter-finals and, lastly, they beat St Andrew’s High School Coatbridge 1-0 to se them through to the finals.

St Ninian’s got us kicked off in the first half but the first opportunity goes to Linlithgow with a great ball whipped into the middle but the attacker couldn’t head it goalwards.

It only took five minutes for the first, and only, goal of the half when Rocco Hickey-Fugaccia sent in a corner and James Hazlett scored over the defence to open the scoring.

St Ninian’s had the brunt of the ball in the opening 45 minutes, controlling the game and pressing Linlithgow well to create more chances.

Linlithgow’s half saw very little creation, but when they had an opportunity, it looked like a good one. Striker Kamil Spalony had a great chance after he was sent a deep ball from the midfield and all he had to do was head it past Ross Hamilton, but from where everyone was sitting, it looked like it was in but, instead, it was sent wide. Kerr Robertson also had a really good opportunity, in the 39th minute he hit a long range effort on target and the St Ninian’s keeper had to send it out for a corner.

The second half gave us a chance early when Mark McCabe came close to doubling his sides tally but he failed to hit the target. Three minutes later, his team built up some good play and were given a corner which met the head of Marc Capaldi who’s header struck off the crossbar, they then quickly got the ball back, a pass split the defence and found Rico Di Marco who scored but, sadly for himself, was offside.

For the next 25 minutes, there was nothing in this game, faux attacks surrounded Hampden but, in the 74th minute, Sean Fyfe picked the ball up just outside the box and curled his effort top right past Matthew Wallace, the Linlithgow keeper, the score was now 2-0 and was looking to end this way up until the 88th minute, St Ninian’s go up on the attack again and Chris Mahon shoots but it goes right to the keepers hands, who then kicks it forwards and finds Joe Porteous who ran and his shot trickled into the back of the net, grabbing them one back but, it wasn’t over, after a hefty injury time period, everyone went up for a Linlithgow corner and Gabriel Wylie grabbed a tap in at the back post to equalise for Linlithgow Academy and send it to a penalty shootout.

In the penalty shootout, everyone scored their penalties – even the Linlithgow keeper getting in on the fun before saving his next penalty and then, Linlithgow’s hero, Kerr Robertson, steps up and scores to send the Scottish Schools FA Senior Shield to Linlithgow for the first ever time.

Todays player of the match was Linlithgow’s keeper, Matthew Wallace. Wallace helped wield his team back from 2-0 down with his courageous efforts between the sticks, the icing on the cake came during the penalty shootout, stepping up to take one, scoring it and then saving it to set up Kerr Robertson nicely.

Congratulations to Linlithgow Academy, worthy winners of the tournament and condolences to St Ninian’s Giffnock.