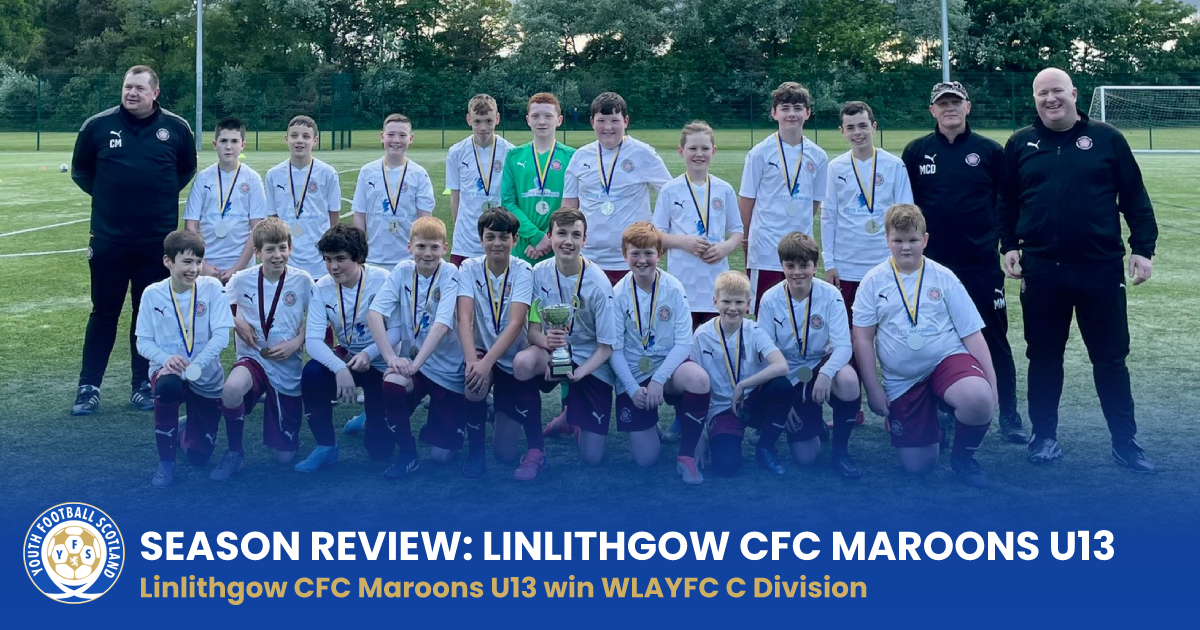 Linlithgow Rose CFC Maroons U13 had a season to remember. They started off the season by winning the mini group to reach the League Cup final. The team also reached the 3rd round of the Regional Cup and the 2nd round of the Scottish Cup. They climbed to the top of the league at the end of 2021. The Rose fell just short in the League Cup final, however they managed to push on to win the league with a few games to spare. The team of the season nominees scored over 100 goals in the season.

“Starting off the season as a development team, to go on and get to the league Cup final and then win the league title was a massive achievement. The players developed week after week and just grew in confidence.”

Coming from behind in the dying embers of a league match proved to be the turning point in the season for McMaster as he said:

“At one point, the boys were struggling with confidence and performing poorly after losing the League Cup final. They were getting beat with 2 minutes to go and pulled 2 goals from nothing to win the match. After that, we believed at that point they would win the league.”

There were to be no late slip ups in the League as the Linlithgow Rose CFC Maroons maintained their position at the top of the league from Christmas until the end of the season.

Talking about what’s next for this group of players, McMaster added:

“Promotion to the B league will be a bigger challenge for the team but they can push on and have a good season. If they keep putting in the performances, there could be a chance of them being scouted for other teams”

McMaster closed off by saying “I’m so proud of everything the boys have achieved this season. To watch them play they have most weeks has been a joy to watch. The team was even nominated for team of the season at the Linlithgow Rose CFC awards night, didn’t win but to get nominated shows how well they did. Well done boys!”

Everyone at YFS would like to congratulate Linlithgow Rose CFC Maroons on winning the WLAYFC Division C in a truly remarkable season. Well done to everyone involved!