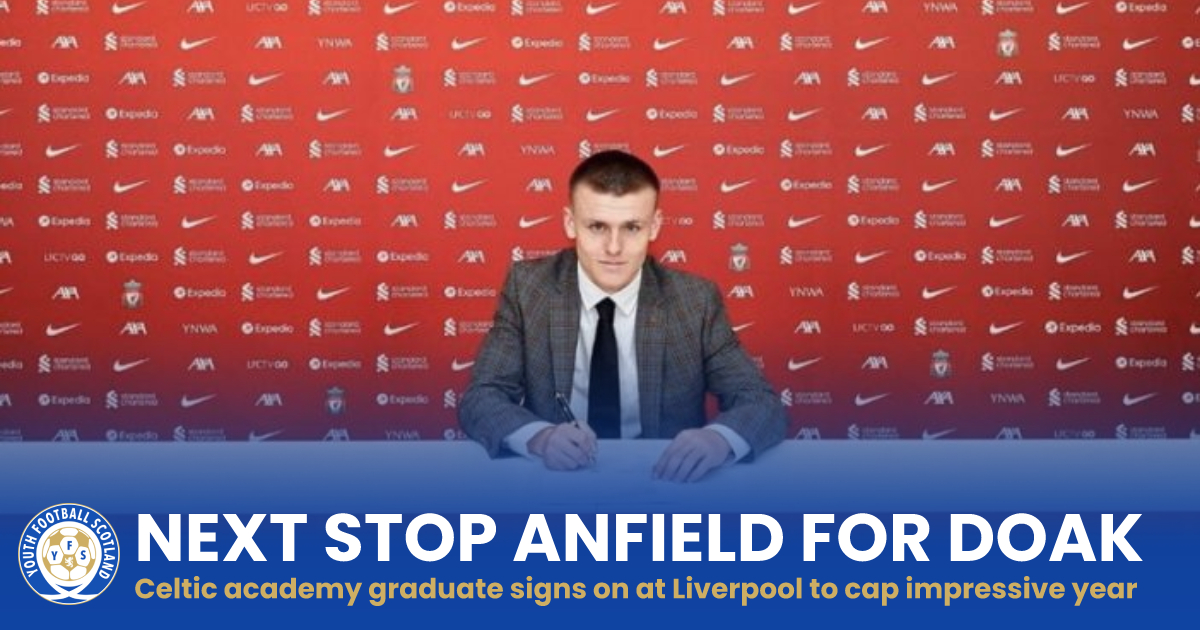 2022 has been an incredible year for Celtic FC academy graduate and Liverpool’s newest acquisition, Ben Doak. Doak made his debut for Celtic on the 29th January against Dundee United, where he became Celtic’s second youngest-ever player behind only Jack Aitchison. Chasing a goal, manager Ange Postecoglou turned to his bench and put his trust in Doak, bringing him on at the 68th minute mark. The winger looked lively right from his first touches showing off his sharp turn of pace and glamorous dribbling ability. The youngster did exactly what the manager likes his players to do, in that he “got the fans off their seats”.

The Celtic fans were impressed by Doak as they took to numerous social media platforms to lavish praise for Doak and were excited to see more from him. Postecoglou was asked about Doak post-match and like the fans, his comments were made up of praise and compliments.

“He’s a fantastic kid who comes from a good family. He looked really composed for his age.

“He’ll have grown up a bit today, it will give him a different perspective on life. He probably would have been on the other side of the terracing if he hadn’t been playing!”

3 days after his debut the fans got their wish as he made another appearance off the bench when Celtic cruised to a 3-0 win against their old firm rivals Rangers. Although he only managed to get 7 minutes of game time, he once again showed what he is all about with his fearless dribbling, you wouldn’t have known he was just 16.

The 16-year-old who is born in November 2005 started his footballing career at a local side named Dalry Rovers, before joining Ayr United and eventually being snapped up by Celtic.

Doak has also enjoyed a fantastic season in the dark blue of Scotland. Having scored on his debut against Wales for the Under 17s, he has received five further caps since, and hit the goal trail with a hat-trick against George in his most recent match.

Doak made his first start for Celtic’s B side in the Lowland League against Stirling University where the young celts ran out as 3-1 winners. The winger contributed to the score as he set up his teammate Ben Summers for Celtic’s first goal of the afternoon.

Ben Doak is a really impressive young player and the next step on his pathway is a move to Liverpool’s prestigious academy. The winger excels in 1 v 1s and is not an opposite number any full-back will relish playing against. The young talent is someone you want to have on your team as his skill and creativity can be an asset for any side. The move south is exciting for Doak and his family. The 16-year-old will be relishing the chance to work with Jurgen Klopp and his team of academy coaches. We look forward to following his progress and wish him the very best of luck.