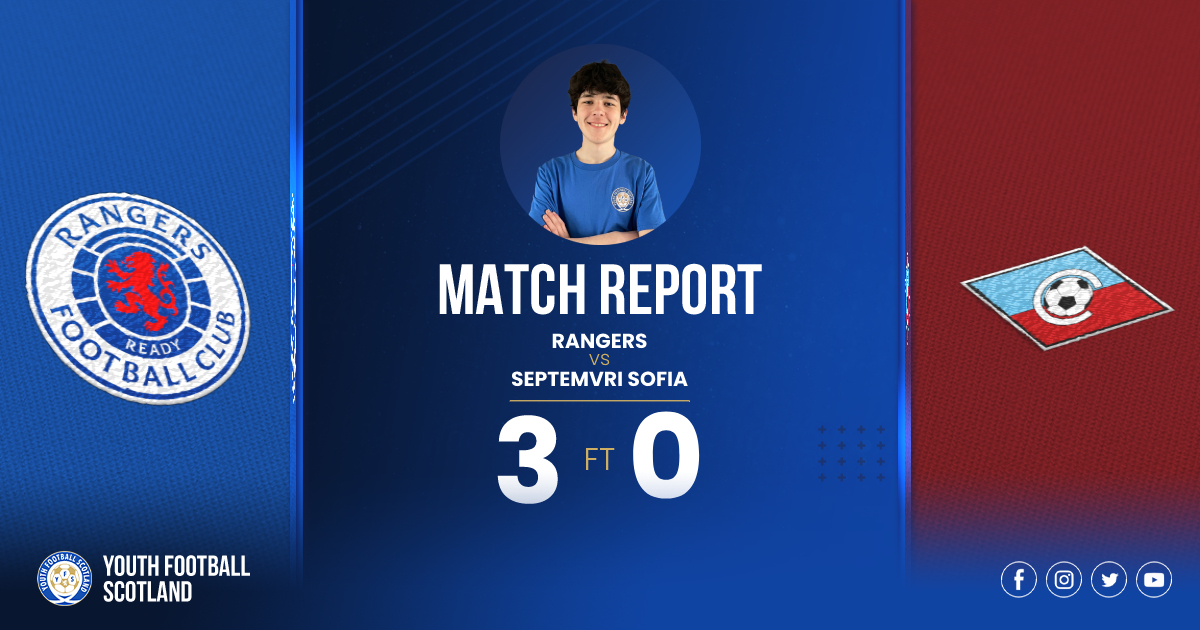 A cold and windy evening in Dumbarton saw Rangers B take on Septemvri Sofia in the UEFA Youth League. Second half goals from Alex Lowry, Anthony Weston and Cole McKinnon secured the hosts’ victory despite a quiet first half performance from both sides.

The game followed last week’s 4-2 victory for Rangers over the Bulgarian side. So, Rangers went into the second-leg with a 2-goal advantage.

The early stages of the game were clearly affected by the wind in Dumbarton. The opening half of the game in general was rather quiet, with a few chances coming from both sides, but none quite able to finish. Neither team particularly stood out as having the better first half, however most half-chances went the way of Rangers. Overall, a lower intensity, scrappier first half than the Rangers fans have been getting used to this season, with several of their last matches having at least 1 goal before 45 minutes.

Upon half-time, Rangers’ coach David McCallum decided a personnel change was the way to go, bringing Lewis MacKinnon on for Leon King and later Arron Lyall coming on for Ross McCausland. The changes were successful for the Glasgow side as, on the 55th minute, Alex Lowry scored directly from a corner kick, something you don’t often see at this high of a level, but it shows the intensity of the wind and potential luck for Rangers that they happened to have the wind in their favour at that moment in time.

Over the next few minutes, Rangers evidently increased the intensity, a few chances which came to nothing, eventually followed by a second goal for the side in blue, with the previous goalscorer Alex Lowry perfectly setting up #7, Anthony Weston across the box for an easy finish around 10 yards out. 2-0 Rangers at the 65-minute mark.

Surprisingly, after the goals where both players were involved, both Anthony Weston and Alex Lowry were subbed off in replacement for Jason Lindsay and Rory Wilson. Around the same time, Robbie Ure was also subbed off for Chris McKee.

The next major chance came from Rangers’ Chris McKee who hit a free-kick from around 25 yards out which hit off the crossbar, inches away from a stunning finish with 18 minutes to go.

Finally, the concluding goal came from a 35 yard wonder-strike from earlier substitute, Lewis MacKinnon. A brilliant top corner finish which was too much for the keeper to handle.

In conclusion, despite a below par first half from both sides, Rangers certainly gave the hundreds of fans in attendance an entertaining show. Unfortunately, not quite Septemvri Sofia’s night, which also confirmed Rangers’ 7-2 aggregate victory.