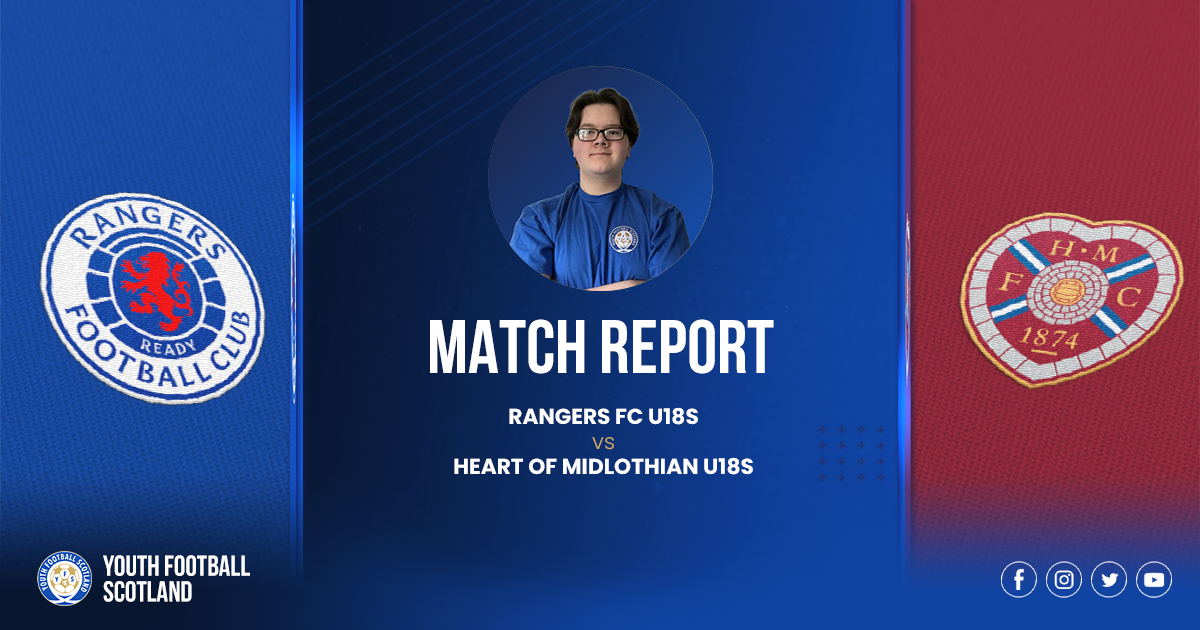 Rangers struck twice in the first half to seal a 2-1 victory over Hearts in the final of the 2021/22 Scottish Youth Cup.

Travelling from Edinburgh, Hearts faced some strong sides in the lead up to tonight’s fixture, a 6-0 victory over East Kilbride opened their tournament in the second round, 2-0 versus Inverurie Locos away in the third round, in the quarters they faced Dundee FC and bested them 2-0 and, finally, in the semis they beat Inverness Caledonian Thistle 2-1 in a close affair.

And for the blue side of Glasgow, a five star 5-0 win over Queen of the South kicked off their Scottish FA Youth Cup in the second round, a 12-1 thrashing of Elgin City followed in the third round followed by a 4-1 win against Aberdeen in the quarters and for the semi-final, coming back from 2-1 down against Hibernian to win 4-2 set them up nicely for tonight’s game.

Both teams have history in this tournament, Rangers have lifted the trophy seven times, most recently in 2019 in an old firm, whereas Hearts last won on the turn of the century back in 2000, beating tonight’s opposition.

Rangers kicked the game off, and from the start, asserted their dominance over the Jam Tarts. Three minutes in and Liam McFarlane was forced to turn away powerful Rangers shots, including an incredible double save. This was only the start of the great performance from McFarlane.

For the next 15-29 minutes it was more of the same, Hearts struggling to get out of their own half and Rangers controlling possession and having almost all the chances. This all clicked for the Gers in the 34th minute when a Rangers corner was whipped into the box. Bobby McLuckie’s defensive header found the feet of Darren McInally who kept it high and volleyed it past McFarlane to open the scoring.

Five minutes later, brace scorer in the semi-final, Robbie Ure was flagged offside as he looked to double the Rangers lead with a cool, calm and collected finish, but the linesman thought otherwise. This didn’t matter though, as in the 44th minute, Rory Wilson hit home a powerful volley past the hands of McFarlane.

Coming out for the second half, Steven Naismith must’ve said some inspirational stuff because the Hearts we saw after the interval, looked far better than them before the first half whistle. They came out and got some decent chances, something that seemed like a far cry in the first 45, but much like the first half, there was no end product.

The Jambos pulled one back with super-sub Murray Thomas scoring a spectacular curling effort to pull one back, but despite late opportunities, this was only a consolation as the Rangers defence stood firm and protected McConnell.

A great game from both sides, the man of the match was a scorer for Rangers, Rory Wilson. Great technique to take his goal and he done other things well too as he got into good pockets of space to get chances for himself and his team mates.

Liam McFarlane’s performance for Hearts shouldn’t go under the radar, he pulled out some magnificent saves to keep it at 0-0 for as long as it was.