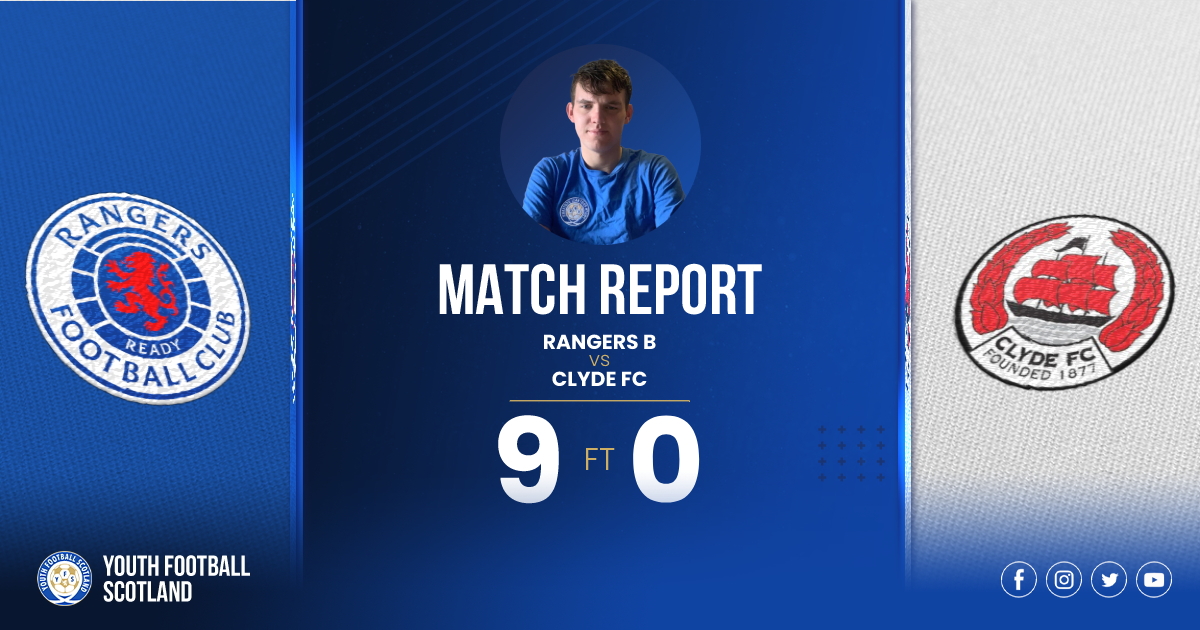 The freezing cold conditions did not detract from the standard of football as a dominant Rangers B side comfortably saw off Clyde under the floodlights of the Rangers Training Centre – picking up a further 3 points in the group stage of the City of Glasgow Cup.

Rangers B started well and took the lead through an early goal from Tony Weston. This lead was later doubled by Ross McCausland before Cole McKinnon added a third from the penalty spot on the stroke of half time.

Rangers B’s dominating performance continued into the second half time extending their lead through Arron Lyall before Weston made it five with his second of the game. McKinnon scored his second from the edge of the box before substitute Darren McInally drilled the ball into the top corner for Rangers B’s seventh. Fellow substitute Charlie Lindsay scored two in the final three minutes to complete the emphatic 9-0 victory.

The hosts started brightly passing the ball well in the opening period. Their first came in the fourth minute after McCausland was brought down by Kevin Nicoll on the right wing. Robbie Fraser put in a good delivery towards Johnly Yfeko, but it was dealt with well by Matthew Elsdon.

It was only two minutes later that Rangers B made Clyde pay, opening the scoring through Weston. Lyall received the ball on the left wing and drove past two defenders at lightning pace before slipping a nice pass through to the Liverpool-born striker who finished well into the bottom right corner.

Weston could have had a second in the 11th minute after receiving a lovely through ball from McKinnon but is stood up well by the Clyde defence.

Rangers B continue to assert themselves into the game passing the ball well and retaining possession, without creating any real clear-cut chances over the next 20 minutes.

After a sustained period of pressure, the Gers finally got their second on the 38-minute mark. Lyall took the ball in midfield and played a nice threaded pass to Weston on the left wing. The Rangers forward took a shot from the edge of the box that was saved by Clyde’s trialist goalkeeper but only into the path of McCausland to finish into the top right corner.

In the 44th minute Clyde almost gifted Rangers their third of the match. Kyle McClelland cleared the ball from the edge of his own box, and it was completely missed by the Clyde backline. McCausland drove towards goal and drilled his shot towards the bottom right corner, but the Clyde goalkeeper made a good save with his outstretched left leg.

The home side kept up the attack however and were rewarded when Weston was bundled over by Billy Mortimer in the box leaving referee, Gary Hanvidge, with no choice but to point to the spot. The penalty was calmy finished into the bottom corner by Cole McKinnon to give his side their third, concluding the first half.

Clyde looked to come out fighting in the second half and looked to attack Rangers B early as Ally Love saw his 46th minute free kick headed away by Fraser. The ball fell to the feet of a Clyde trialist, but the midfielder could not keep his 35-yard shot under the bar.

Only three minutes after being subbed onto the park, Kane Richie-Hosler won the ball on the right wing took it down the line before playing a perfect pass across goal to Lyall who finished well from close range, increasing the deficit to four.

It did not take long for the home side to make it 5-0. Three minutes after going four ahead, Adam Devine took the ball on the right wing and played an inch-perfect cross to find Weston at the back post who looped his header into the top right corner.

Despite the deficit, Clyde did not give in to the young Rangers B side and continued to attempt to get on the scoresheet themselves. Their best chance came in the 63rd minute through a brilliant delivery from Mortimer. Owen Andrew rose well to head the ball towards goal but had his head in his hands as he saw his header cannon off the inside of the right post.

After almost letting their clean sheet slip Rangers B responded rapidly, scoring their 6th goal of the match a minute later. Lyall’s low cross from the left wing was dummied by Richie-Hosler. The ball came out to McKinnon who fired his shot low past the goalkeeper.

Clyde’s next chance to respond came from controversial signing David Goodwillie. After joining on loan from Raith Rovers earlier in the day, the ex-premier league striker was subbed on to try change his sides fortunes and nearly did in the 68th minute, pouncing on a stray pass from Murray Miller but only managing to produce a tame effort straight at Lewis Budinauckas.

With 10 minutes to go things went from bad to worse for the bully wee as the hosts extended their lead to seven. Devine played a deep cross from the right wing to the feet of Charlie Lindsay. Substitute Lindsay stoop up well to the defender before laying the ball off to Darren McInally who rifled his shot into the top right corner.

Lindsay then got on the score sheet himself with three minutes left in the match. McInally produced a crunching slide tackle to win the ball from the Clyde midfield which was then played through to Lindsay to shoot low, under the goalkeeper.

The substitute winger then scored a quickfire second, two minutes later, skipping past Elsdon and drilling his shot into the bottom right corner giving his side their 9th goal right before the final whistle.

Overall, it’s a humiliating defeat that Clyde will be desperate to put behind them. Rangers B will be delighted with their clinical performance that allows them to overtake Queen’s Park and jump up to the top of the table after taking maximum points from their first two group games. The Gers look to build on this result next Tuesday as they play host to Queen’s Park in a top of the table clash at the Rangers Training Centre.

Man of the Match – Arron Lyall

The exciting winger produced moments of brilliance throughout the 90 minutes, creating many chances for his side and getting on the score sheet himself with a well taken goal.