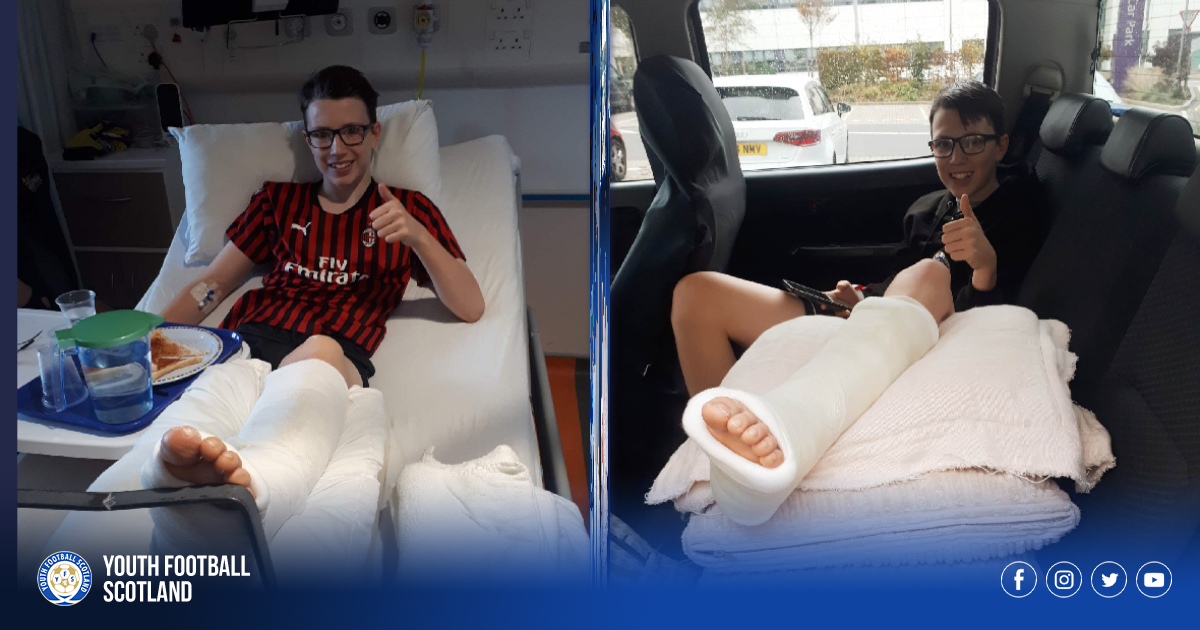 Grassroots football has a habit of surprising you with magical moments. Last minute winners, wondergoals, penalty saves, heroic comebacks. However, sometimes the magic appears off the pitch. And as the season of goodwill gets into full swing, a story has unfolded which epitomises all that is special about the game we love.

On Saturday 6th November East Calder met Pumpherston United in the West Lothian AYFC’s C Division. It was a typically chilly November morning, but the players were up for it and the match was played in good spirits by two good footballing teams.

However, in a split second, everything changed. A tackle from one of the Pumpherston players lead to a horrific injury to Rory, of East Calder.

The match was abandoned. Rory had to lie on the pitch, in the rain, covered in jackets for one hour and 15 minutes waiting on an ambulance, as it was too dangerous to move him. Five hours after the injury, his foot was manipulated back into place, while he was sedated, at the Sick Kids Hospital in Edinburgh.

As Rory was coming to terms with the news that his ankle had been fractured and dislocated, he spoke to his parents. He felt that the tackle on him was not a deliberate attempt to hurt him and asked if he could do anything for the red card given to the opposition player to be rescinded. He was going to miss a lot of football, but he didn’t want another young player to suffer too, for something that was an accident.

It was at this point, YFS was alerted to Rory’s story and took great pride in sharing his actions with the wider youth football community (click here to view post). Parents, players and supporters from across Scotland and beyond, were impressed with what Rory had done and sent on their best wishes.

However, the story didn’t end there. A couple of weeks later, Rory’s dad Keith got in touch to share further news.

Keith said: “We would like to thank everyone for their kind words. The reaction was amazing and really cheered Rory up. He read all the comments, including a free one to one session from an academy in Paisley.”

“The player who tackled him, Ethan from Pumpherston United 2008s, and his dad, came to visit Rory. He was relieved to see Rory smiling and better than when he saw him last. He thanked Rory for asking to take away the four game ban as he played the following week and scored a goal.”

“He presented Rory with a card from his team and it had £120 in it. They wanted him to buy new boots as the ambulance crew cut his old boot off his injured foot. A lovely gesture from another team in the league.”

Everyone at YFS is so proud to hear about the care shown by both players, their families, their teams and the wider grassroots football community. Whilst naturally at the time of a bad injury, the sympathy lies with the player hurt. However, it can also be incredibly traumatic for the other players involved. These two young men have shown maturity beyond their years and provided a wonderful example for anyone else who experiences something similar in the future. Well done, everyone.