Scotland beaten by strong English side 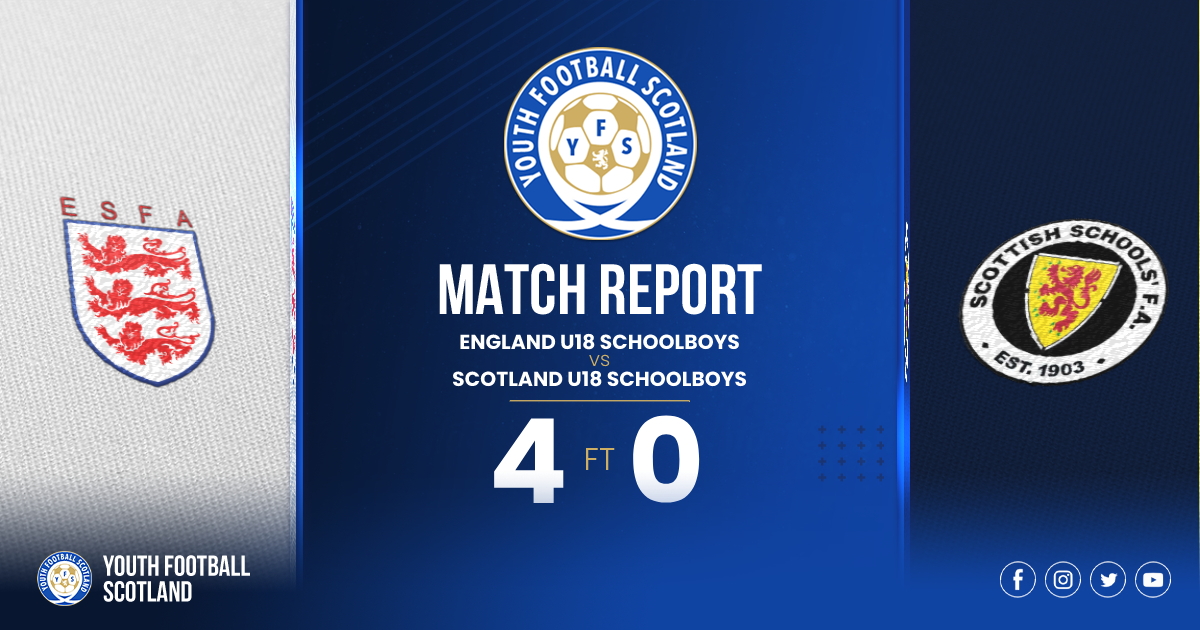 Scotland Schoolboy’s fell to a 4-0 defeat to England in the penultimate fixture of the inspiresport Centenary Shield at The Brewery Field, home of Spennymoor Town.

A hat-trick from captain Josh Stones and a wonderful solo goal from Aflie Dean on the night seen Scotland suffer their second defeat of the competition.

Although having the majority of possession throughout the game, the Dark Blues could not do much to break down the English defence, being held to shots from range for the most part with the Three Lion’s ruthlessness shining through in the end.

The Scots came out of the traps early, clearly with the recent defeat in the Republic of Ireland on their minds, forcing a corner in the first 5 minutes, which evaded both Klimoniek and Binnie in the box.

The first 5 minutes were fought at a break neck speed with the game starting in an end-to-end fashion, before the English dominance began to ring true. Although not having much of the ball, the English counter-attacks were proving effective at penetrating Scotland’s back line with Stones, Hall and Dean proving to be the danger men.

Stones proved the threat he posed should be of concern with two good chances in the first 10 minutes. The first, a glanced header at the front post from a corner flashed across the face of the goal and out for a goal kick. The second, battling hard to win possession, then driving at the Scottish defence before driving a fierce shot from 22 yard across Russell, who was delighted to see the ball crash off the post before being cleared for a corner.

Again, Stones continued to cause the Scottish rear guard problems, showing great hold up play to receive the ball, work a one-two before driving in the box squaring for Dean in the centre of the 6 yard box who seen his attempt saved by Russell and sent for a corner.

On 31 minutes, England gained their lead, that man Stones rising highest in the box from a driven corner in to bullet his header into the net.

Soon after England made it 2-0, the ball breaking out after a Scottish free-kick attempt, with the attempt to send the ball back into the mixer blocked, a defensive mishap seen Stones nick the ball at the halfway line, driving in all alone on goal before rounding the keeper and calmly rolling the ball home.

Scotland entered into the half-time break licking their wounds after a quick fire Stones double, however came into the second half much like the first, looking to get on the front foot and back into the game early doors with MacInnes having a great chance from the edge of the 18 saved well by Harvey Keogh.

England rode the early storm and killed off the game on the 53rd minute. Alfie Dean, clearly channelling the spirit of Jack Grealish with his downturned socks and direct running style picking up the ball in the middle of the park, twisting and turning before driving the ball home from 23 yards with his left foot into the bottom right hand corner of the Scottish net.

Scotland continued to battle, however became increasingly more desperate to get a goal on the board with some wild shots from range hit out of hope more than anything. Lucas Stenhouse had a good chance late on, making his way into the box before chopping onto his left foot, however shot straight at the English keeper with the strike comfortable palmed to safety.

Josh Stones rounded his night off with his third and arguably best of the evening, his introduced strike partner Cooper Hedba winning the first header before poking the ball through into the left channel for Stones to collect, steady himself before curling high into the far right corner of the net. The strike took a slight deflection not helping Russell in his attempts, with the ball sailing over his head into the goal.

A tough defeat for the Scots in their battle against the ‘Auld Enemy’ however, I am sure all of the boys will take a lot of lessons from the game and will be all the better for the experience that they gained from the night.

A hat-trick on the night for the England captain, and a player who shows the potential to really make a name for himself down South. Strong, agile, pacey and knows where the goal is. A danger to all defences with his tireless work rate, and won’t be surprised if he takes the golden boot at the end of the competition.

A tough result on the night for the Dark Blues, however Lorimer early on showed that he knew the gravitas of the fixture he was playing in. Not afraid to get stuck in and do the dirty work, battling away in the centre of the park for his team mates, all whilst remaining composed and assured on the ball when in possession.

Scotland edged out by Irish in Centenary Shield