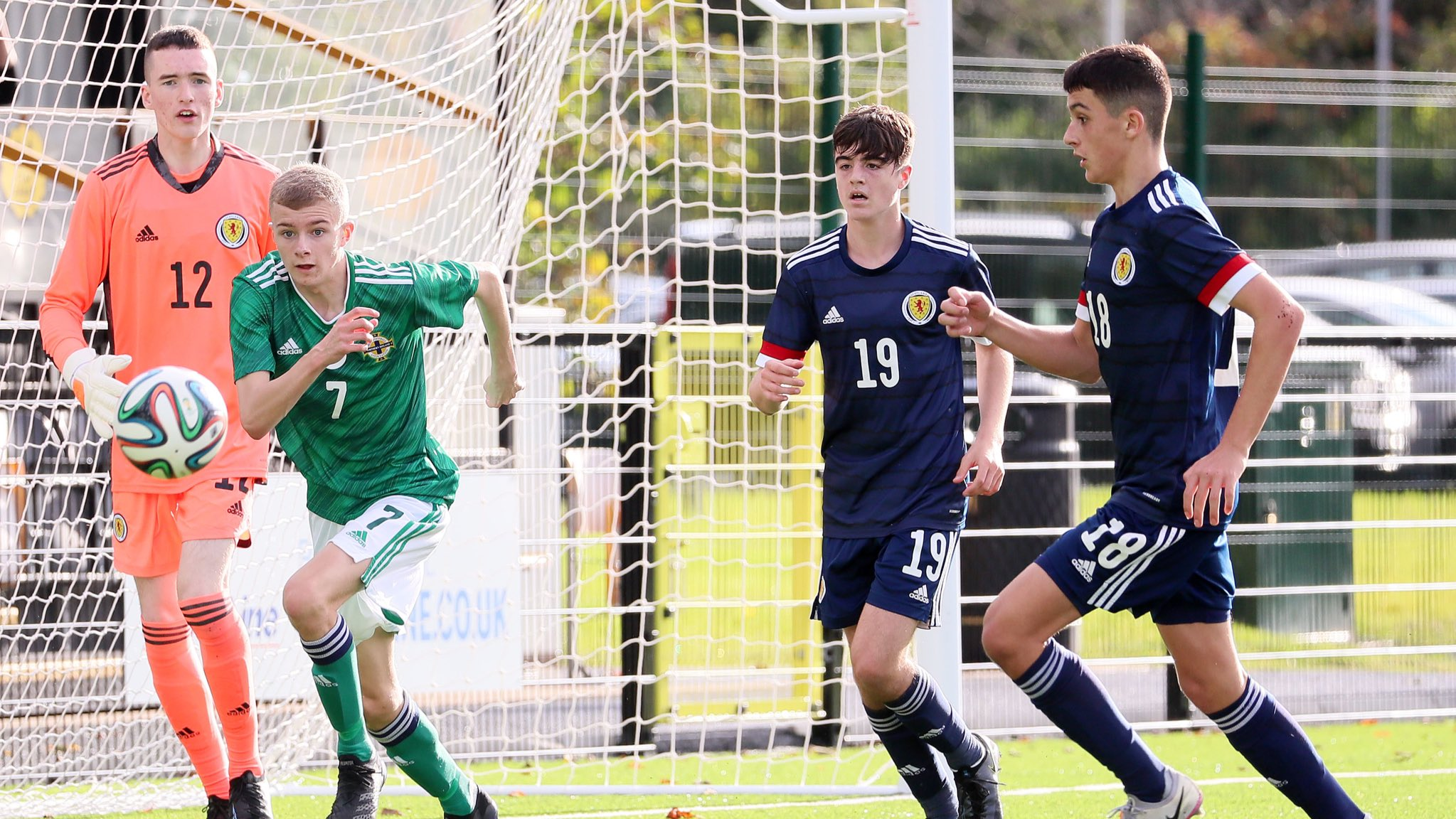 Northern Ireland came away from the Blanchflower Stadium, home of Belfast semi-professional side Harland & Wolff Welders F.C, with a well-earned 1-0 victory over Scotland in the second round of fixtures, in the Victory shield. Scotland fought well throughout the match but failed to build on their impressive 1-0 win against Republic of Ireland on Sunday. The result moves Northern Ireland off the foot of the table, now only trailing Scotland by goal difference.

Kieran Morrison earned his side the three points finishing well past the helpless Scottish goalkeeper midway through the first half. Sam Kane helped keep Scotland stay in the game with an impressive penalty save against Brendon Hamilton, but the Northern Irish defence stood firm throughout the 80 minutes to keep the clean sheet.

Scotland started brightly in the match and controlled possession for the opening few minutes. Their first chance came in the 3rd minute, when Gabriel Forsyth chipped a lovely pass to Mitchell Frame on the left wing, but he could not lift his cross past the head of Joshua Briggs.

After a period of Scottish dominance, the game settled, and Northern Ireland managed to come into the game themselves.

In the 13th minute Francis Turley won a free kick around 30 yards away from goal. Hamilton made an ambitious attempt to beat Kane but was met by a comfortable catch from the Scotland goalkeeper.

The first controversy of the match came in the 17th minute when Bailey Rice’s long ball appeared to have been handled by Mason Munn outside of his box, however, the officials did not entertain any claims from the protesting Scot’s.

This was only followed by further frustration for Scotland as Northern Ireland opened the scoring one minute later. Theo McToal received a pass on the right-hand side of his half and dinked it down the line to Morrison. The winger then drove into the box and fired the ball into the bottom right corner.

In the 20th minute,, Morrison received the ball again and the winger skipped past Alasdair Davidson and provided a flawless cut back to Rhys Walsh, but the Northern Irishman’s shot curled wide of the top right corner.

A minute after almost conceding themselves, Scotland almost equalised up the other end, but Rory MacLeod could not get on the end of a driven pass across goal from Daniel Cummings.

In the 25th minute there was a horror show from the Scotland defence. After Kane’s pass went astray, Davidson was closed down superbly by Morrison who blocked his clearance. Jay Dalzell then ran onto the ball and carried it deep into the box leaving captain Rice no option but to pull him down in the box. The referee pointed to the spot and took out a yellow card to add to Rice’s misery. Kane more than made up for his mistake though as he read Hamilton superbly and through himself towards his bottom left corner to save the penalty comfortably.

The save appeared to motivate Scotland as they tried their hardest to get back into the game.

In the 28th minute, Cummings broke down the right wing and crossed to MacLeod who controlled the ball excellently in the oppositions box. He then turned and laid off Cameron Sullivan who beat McToal, but the Scotsman saw his shot blocked well by Briggs.

Scotland continued to press on but failed to create any more clear-cut chances in the first half. The only real attempt came four minutes before half time, when MacLeod swivelled round his defender but could not hit the target from 20 yards.

It was cagey start to the second half with both teams struggling to create any real goalscoring opportunities. Cummings thought he had equalised, in the 43rd minute, when he ran onto a looping pass from Josh Dede and slid the ball under the goalkeeper. To his despair however the linesman flagged for offside.

Scotland spent the next period of the match on top but just could not make the most of their pressure. Cummings struck the ball well from the edge of the box in the 50th minute, but saw his shot fly just over the crossbar.

Two minutes later Ben McGonigle made a good run down the left wing and forced the foul from S19. Ryan Donnelly then whipped the ball towards goal trying to catch out Kane, but the Scottish keeper tipped it onto the crossbar.

In the 57th minute Hamilton was booked for a crunching tackle at the edge of the box but the resultant free kick from Lennon Miller was held well by the keeper.

On the hour mark, Cummings and Alfie Bavidge combined well in the middle of the park and set Bavidge through on goal but Hamilton made a brilliant tackle to prevent any attempt at goal.

In the 63rd minute came the most dramatic moment of the second half when Scotland had two shouts for penalties waved away by the referee. Cummings drove past Kyle McCloskey and cut the ball back to Miller whose shot at goal was saved by the keeper. Bavidge sprinted in for the rebound, but his shot deflected back to Miller. He went down under pressure from McToal, who appeared to swipe at the Scots ankle, although there did not seem to be much contact. This was only the first penalty appeal though. Ben McGonigle failed to clear the ball before Bavidge tumbled to the ground, but the officials were not swayed by the Scottish pleas.

In the 72nd minute Turley scooped the ball over the Scotland defence, but Ciaran Francis could not finish the one on one drawing a good save from Kane.

Four minutes later, Cummings worked well to make space for himself, but his near post shot from a tight angle was turned behind by Munn.

The officials indicated five minutes of additional time which was mostly spent watching Northern Ireland try to kill the game and ensure the three points.

The game continued into a sixth additional minute to the fury of Northern Ireland’s bench. Dede’s long throw was hoofed away by Callum Burnside, as the referee ended this exciting encounter.

Overall, Northern Ireland came out on top due to the clinical prowess of McToal, something Scotland seemed to lack throughout the 80 minutes. Scotland did put up a good fight though and will still believe they can win this tournament.

Scotland now look to bounce back against Wales on Friday. The Victory Shield has a tradition of sharing the trophy when teams are level on points. This means a Scotland win in the final match would guarantee a share of the silverware with their opponents on the day. They would then eagerly await the outcome of the Ireland versus Northern Ireland match later that day, where Northern Ireland could also reach six points with a victory (which would create the first three-way share of the trophy since 1990–91). However, if Wales earn a point or more from the match, they will be outright winners.

Morrison was the driving force of Northern Ireland’s attack and got his team the win with the all-important goal.

Cummings worked tirelessly throughout to get Scotland back into the game and was the most creative out of his team’s attack.