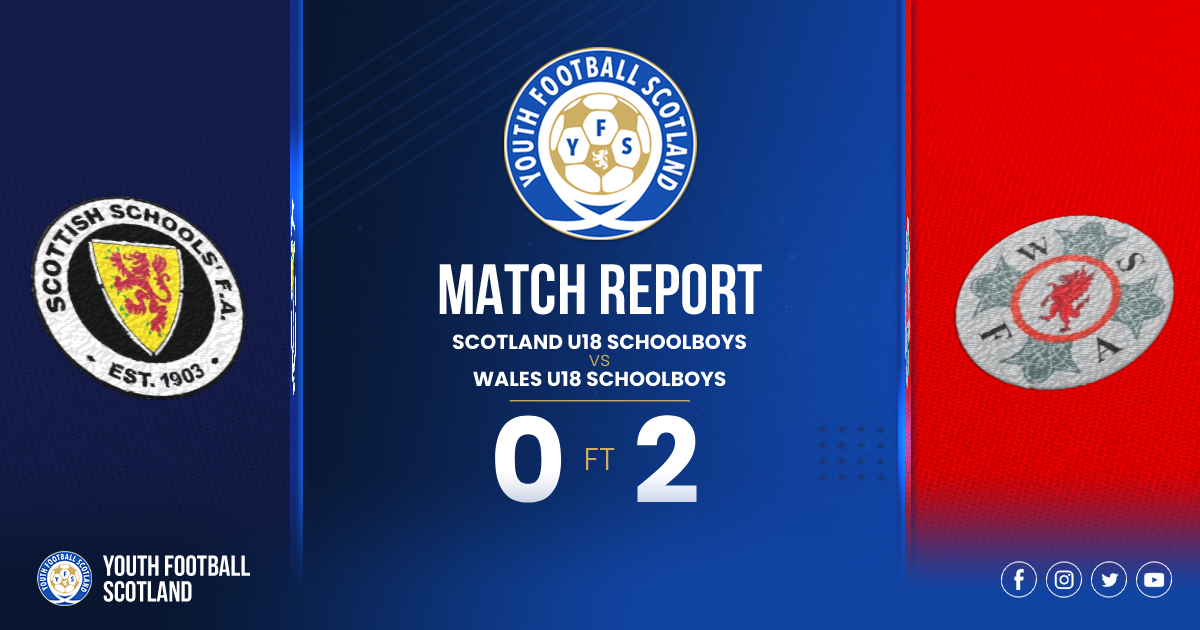 The final game of Scotland’s 2022 Inspire Sport Centenary Shield ended in a 2-0 defeat to Wales at Galabank Stadium.

Welsh captain Josh Williams was the hero for the Red Dragons on the night, with two pieces of individual brilliance from the skipper proving to be the difference between the two teams.

Much like the game before, Scotland enjoyed the majority of the ball throughout the 90, however struggled to create much in attack with most of the play being had in front of the Welsh’s stout back 4.

As per type throughout the tournament, Scotland looked to come out of the stalls at pace, with Lewis Gibson creating a glorious chance down the left hand side whipping a cross flush onto Ben Lamont’s head, however the attacking midfielder was unable to find the purchase required to send it goal wards and seen the ball travel wide of the far post.

Wales weathered the early storm and began to grow into the game, keeping compact to their 4-2-3-1 shape, looking to go long to put the Scots backline under pressure at the earliest opportunity – and the tactics paid dividends. In the 9th minute, an early, hopeful ball into the box was met with a meek headed clearance, and Welsh captain on the night Josh J. Williams meeting the ball flush on the volley with his right foot, dipping into the bottom left corner of the Dark Blues net.

Scotland attempted to fire back at the earliest opportunity with Gibson again providing a delicious corner ball in from the right, with Matthew Strachan having ghosted away from his marker charging to the 6 yard box had the whole goal to aim at, however chose to glance the header seeing it flash wide of the left post. A great chance to pull the game back level unable to be taken.

Scotland began to grow into the game, countering Wales direct approach by moving the front 4 higher against their back line, creating distance between the Welsh striker and his midfielders, making is easy for Lormier and MacInness to pick up the loose balls and begin to dictate the pace of the game.

Although the Boys in Blue began to dominate more of the ball, the Welsh defence held stoutly, with the only half-chance Scotland having coming from a hopeful 40 yard lob by Gibson hoping to catch Welsh keeper Knott on his heels, however his speculative attempt unfortunately sailed just over the bar.

The second half slowed in pace compared to the first, Scotland looked as if the goal had knocked the wind out of their sails, added with substitutions scattered from the second half whistle to full-time, the slowing pace and lack of rhythm was understandable.

Scotland continued to huff and puff however struggled to create any sort of chance or scare for the Welsh back line, remaining strong and well drilled throughout.

Wales had a chance to double their lead on the 53rd minute through strong hold-up place from Kircough, spinning his marker and laying off to Ellis who fired a right footed shot low and hard from just outside the 18, unlucky not to see it nestle in the bottom corner.

The Welsh doubled their lead on the 73rd minute, with star man on the night Josh J. Williams showing some class. Williams picked the ball up in the centre of the park, drove directly at the defender, committing him to the ball before dropping his right shoulder and unleashing a fierce low strike past Wallace’s right palm into the net.

Scotland continued to try and mount pressure on the Welsh defence but to no avail, with Wales winning comfortably on the night.

The St. Johnstone youth has played in a number of positions throughout the 4 games, however looked his most comfortable on the left side of defence this evening. Strong and dominant in the air, whilst also having a sweet left foot and able to mix his play from ranging diagonals to short, incisive passive. Klimionek proved he’s not afraid to get stuck in, throwing his weight around in both boxes to make his presence known. A mature performance from the young man.

The captain was the man in charge for Wales on the night. Not a blade of grass didn’t have his name on it. The young man was tenacious in everything he did, snapping into tackles, tireless pressing in the middle of the park, and showed the desire to track back and dig his team mates out a hole. But, when Williams had the ball, his class shined through. A cultured right foot, able to pick a pass from almost anywhere on the park, and not afraid to commit defenders and get a shot off when the opportunity opened up for him. His performance was more than deserving of the two wonderful goals he scored on the night.