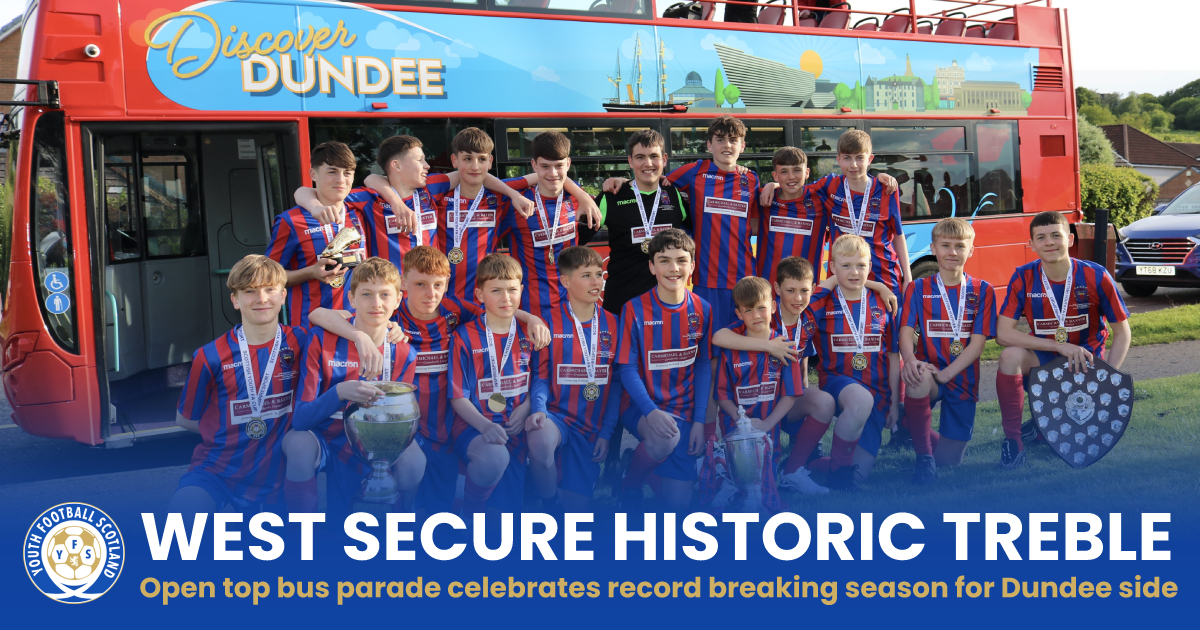 Dundee West Royals had a season to remember, at the Under 14 age group, winning a historic treble. They became the only Dundee West side to ever win the Scottish Cup, in addition to completing a perfect ‘invincibles’ league season and lifting the Dundee West Anniversary Cup.

Head coach Richie Webster said: “I couldn’t be prouder of this group of players. They have had a tough introduction to 11-a-side football between Covid-19 and their league being called short last year. However they’ve stuck together as a group, started this season well and when we came up against adversity, we pulled through. It means the world to everyone involved.”

Winning the inspiresport Scottish Youth FA Cup was the pinnacle of an outstanding season. It was the first time a team from Dundee West, a club with 37 years of history, has lifted the national trophy. It was also the first time in nearly two decades a team from the City of Discovery has achieved the honour, with Fairmuir BC the last in 2004, despite many coming close.

They didn’t do it the easy way, with a number of tough tests and bumps along the road. Webster highlighted two ties in particular: “The last 32 match against Cumbernauld United away from home was a big challenge. They were an excellent side and went 1-0 up, before our goalkeeper Kyle Wilson pulled off a point blank save. We then regrouped, turned it around and came out 4-2 winners. Rossvale Alba in the quarter-finals was similar. We were 2-1 down and they looked ever dangerous. But we always had goals in us and ended up holding on to secure a 4-3 win.”

“The semi final against St Peter’s from Paisley was another goalfest, with us edging it 5-4. And the final itself saw us come out 3-2 winners against Stenhousemuir. Josh Holt was awarded Man of the Match with an incredible display but the whole team were outstanding on the big stage at Airdrie.”

In the league, despite the 100% record, it wasn’t until May that the title finally seemed within grasp. Closest challengers Dundee United SC and West hadn’t met all season, but then played twice within the space of a few days. A 4-2 win away from home and 2-0 victory at Charlotte Street put West within touching distance of the title.

A few weeks later, with the title secured, there was just one final game to negotiate, with the last outing being a trip to play third place Montrose YFC. Webster said: “Montrose showed superb respect giving our boys a guard of honour onto the pitch. However, when the whistle blew, we know we were in for a game and within 20 minutes we were 3-0 down. However, the boys were determined to keep their record and a stirring second half performance was in store. Substitute Robbie Gilchrist came off the bench to score a hat-trick, including a last minute winner, and the rest was history.”

The final piece of the jigsaw was local cup competitions. And it was in those where the team suffered their only defeat of the season. A 3-0 loss to Dundee United SC in the East Region cup, as the Tangerines went on to lift the trophy. Webster said: “It was a tight first half but in the second we were well beaten. It gave us a vital wake up call, with the Scottish Cup semi-final on the horizon.”

There was no slip up in the final of the fourth available trophies. An emphatic 4-0 victory over Montrose in the final of the Dundee West Anniversary Cup got the season’s trophy tally up and running. Despite being named after the club, the local cup competition has only ever been won once by Dundee West. As it happens that team included Cameron Welsh, brother of Harry Welsh who finished this season as the Royals’ top scorer with 66 goals. A family affair indeed.

Webster finished by saying: “Naturally due to our successes a few of the boys have been offered pro youth opportunities and will go down that path, which we wish them every success with. However, the majority of the boys are signed up again for next year and we look forward to trying to emulate this season’s achievements. The bar has been set high!”

Everyone at YFS would like to congratulate the Dundee West players and coaches on a truly remarkable season. Well done to everyone involved.