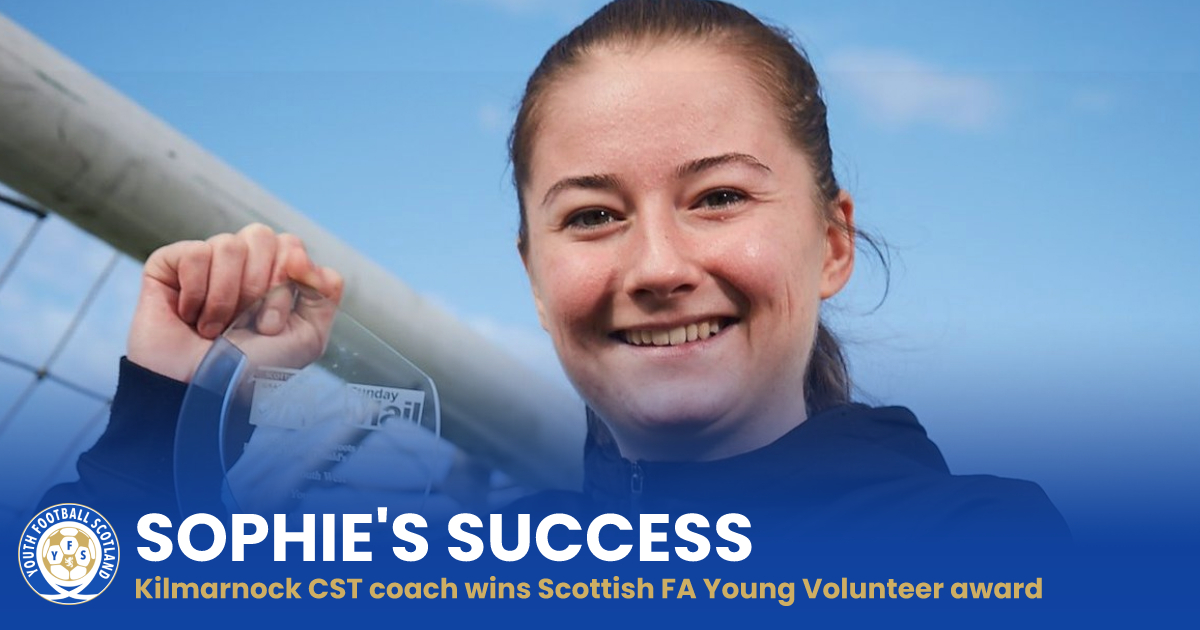 Sophie Watson, 19, from Kilmarnock has won the ‘Best Young Volunteer’ Award at the annual Scottish FA South West Grassroots Awards which celebrates and recognises the contribution people throughout the region make to youth football.

YFS’ reporter, Matthew Muir spoke to Sophie to find out about her reaction to receiving the award.

She said: “It was totally unexpected because I wasn’t even aware that I had been nominated for the award so I couldn’t believe it!

“Coaching is something I’m really passionate about so to be recognised for doing something I absolutely love is so special and is definitely one of my proudest achievements so far.”

Sophie was studying HND Coaching and Developing Sport at Ayrshire College when she got involved in the SFA ‘My Volunteer Inspire Project’: “I found the project really beneficial as I was able to complete up to the 1.3 Coaching Children’s Qualification within the SFA Coaching Pathway.

“This helped me to gain a better understanding of myself as a coach, my knowledge of coaching others and inspired me to take up coaching football in my local community.”

“I absolutely love women’s football and Rose Reilly is one of my female role models in sport so when I heard the Rose Reilly Football Centre were looking for volunteers to help run sessions, I knew it was something I wanted to be part of.

“I believe that the centre is a fantastic way to get more girls into sport, particularly football, challenge stereotypes and help break down barriers to participation in sport.”

On her time so far at the CST, she said: “I’m getting really valuable coaching experience as I have to take responsibility to plan and deliver fun and enjoyable football sessions for participants of different ages and ability.”

Having just left Ayrshire College, Sophie has already started to look ahead to the future: “My lifelong ambition has always been to join the Armed Forces and I start basic training for the Royal Navy early next year. However, over the next few months I’ll still be coaching with KCST and at the Rose Reilly Football Centre.”

Five young Scottish players to keep an eye on this season
Rory’s & Ethan’s story: The spirit of grassroots