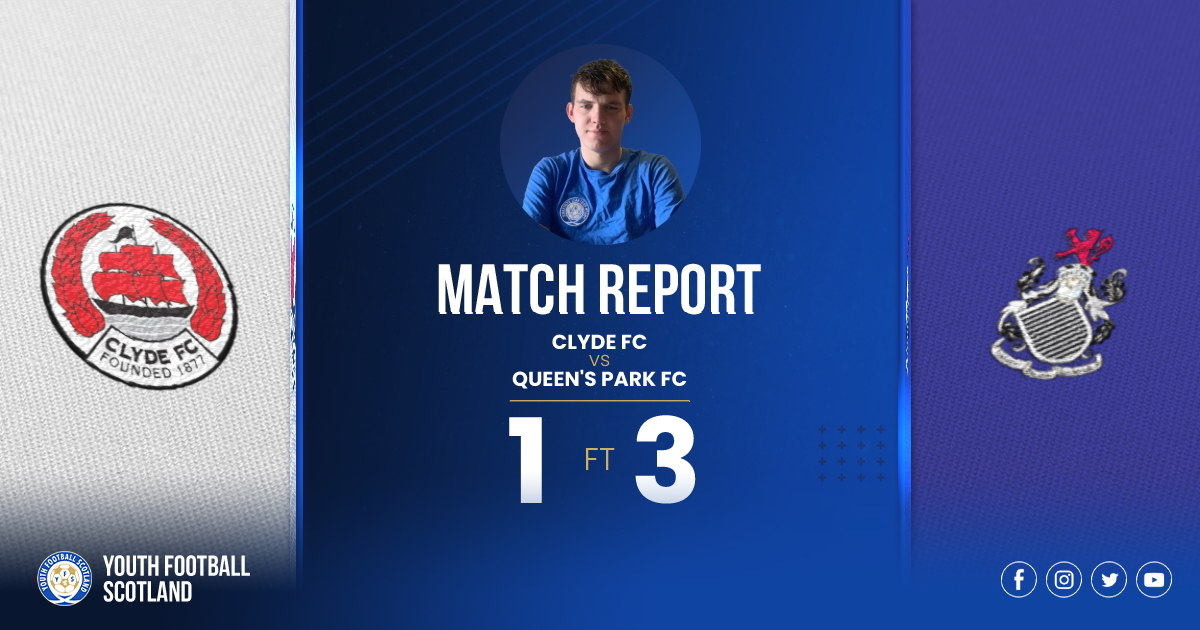 Clyde’s winless streak in the City of Glasgow Cup continued at Broadwood, as visitors Queen’s Park’s dominant performance secured their place in the semi-finals.

The only goal of the first half came through Luis Longstaff’s calm finish in the 29th minute. Queen’s Park then added to their advantage in the second half through Connor McBride before substitute Liam McLeish put the nail in Clyde’s coffin ten minutes from time. Robert Jones rifled a penalty into the top corner in the last minute, but it would be no more than a consolation for the Bully Wee.

Ronan Darcy shots at goal have become quite the theme of this tournament and it did not take long for this to continue as his first chance in the match came four minutes in. The winger had a pop at goal from distance which Josh Bradley-Hurst just about managed to turn behind goal.

Clyde began to fight their way into the game and almost opened the scoring in the 11th minute. Ally Love took the ball on the left wing and played a lovely pass across field for a Trialist to run onto. The Trialist set himself well but saw his shot towards the bottom left corner held well by Jacques Heraghty.

Clyde continued to press over the next ten or so minutes without causing much of a threat. Jones put himself about in the box, but the defence stood firm to stop any clear chances at goal.

In the 23rd minute Queen’s Park had a glorious chance to take the lead but were prevented from doing so by some heroic Clyde defending. Longstaff drove with the ball down the right wing to the byline before turning inside to make a mazy run towards goal. The ball came out to Darcy on the edge of the 6-yard box, but the winger saw his shot blocked tremendously well by the sliding leg of a Trialist on the goal line. The rebound came back to Darcy, but the defender came out quickly to clear the ball away.

After a period of sustained pressure from the Glasgow side, Queen’s Park broke the deadlock just before the half hour mark. The ball came to Darren Lyall in the middle of park and the deep lying midfielder produced a magnificent through ball to send Darcy into the box. Darcy squared the ball brilliantly to Longstaff who kept his cool and placed the ball into the bottom right corner.

Two minutes later Love picked up the first yellow card of the match. After being the end of a couple nasty challenges himself, the Clyde captain lost his cool and launched into a crunching tackle on McBride forcing referee, Steven MacDonald, to reach for his pocket.

Clyde won a free kick in the 35th minute, about 25 yards from goal, but a Trialists effort toward the bottom left corner was held well by Heraghty.

The half fizzled out with neither team managing to trouble the oppositions goalkeeper over the next ten minutes.

Clyde came out the traps quickly in search of an equaliser with Billy Mortimer seeing his effort just about dealt with by Heraghty in the first minute of the half.

The Bully Wee had a glorious chance to equalise in the 56th minute. Mortimer put a floated delivery into the box which was won brilliantly Jones who leapt high above the goalkeeper to head the ball to Owen Andrew. Andrew headed the ball back across goal to the on running Aidan Cassidy, but to his despair, the Clyde defender saw his headed effort deflect back off the underside of the cross bar.

Queen’s Park worked hard to regain control of the game and were rewarded when they doubled their advantage in the 68th minute. McLeish took the ball in the centre and played a nice pass to Longstaff on the right wing. After his earlier goal, Longstaff this time turned provider and laid the ball across to McBride who set himself well with some superb footwork before squeezing the ball through the crowded six-yard box and into the back of the net.

The Spiders spent the next ten-minute period in control of the game but failed to trouble Bradley-Hurst. McLeish played a nice one-two with Scott Williamson before blazing his shot over the cross bar in the 77th minute before Williamson sliced his shot wide, from the edge of the box, a minute later.

With ten minutes to go in the cup tie Queen’s Park killed any chance of a comeback, scoring their third goal of the evening. Substitute Kane Thompson did brilliantly well to take the ball on the right wing and create a bit of space to lay the ball off to McLeish, who fired his shot from the edge of the box into the bottom left corner.

Much to their managers frustrations, Queen’s Park let their clean sheet slip through a last-minute Clyde penalty which came out of nowhere. A corner came into the box and fell right in front of Gregor Nicol to volley away from danger, but Morgaro Gomis nipped in quickly, making the ball first and drawing the contact, leaving the referee no option but to award to foul. Jones stepped up to the spot and smashed his penalty into the top right corner, but it was too little too late for Clyde, as the full-time whistle followed minutes later.

Overall, it was a deserved win for the Spiders who showed their creativity and clinical edge in front of goal to pick up the three points. This result moves them up to second in the group and ensures their place in the semi-final. Clyde, however, remains in fourth spot and will need to avoid a loss when they welcome Partick Thistle on March 29th, in order for them to join Queen’s Park in the next round.

Man of the Match – Luis Longstaff

The Queen’s Park wide man worked tirelessly throughout the match to create for his team and was rewarded with good assist to add to his nice, composed finish earlier.