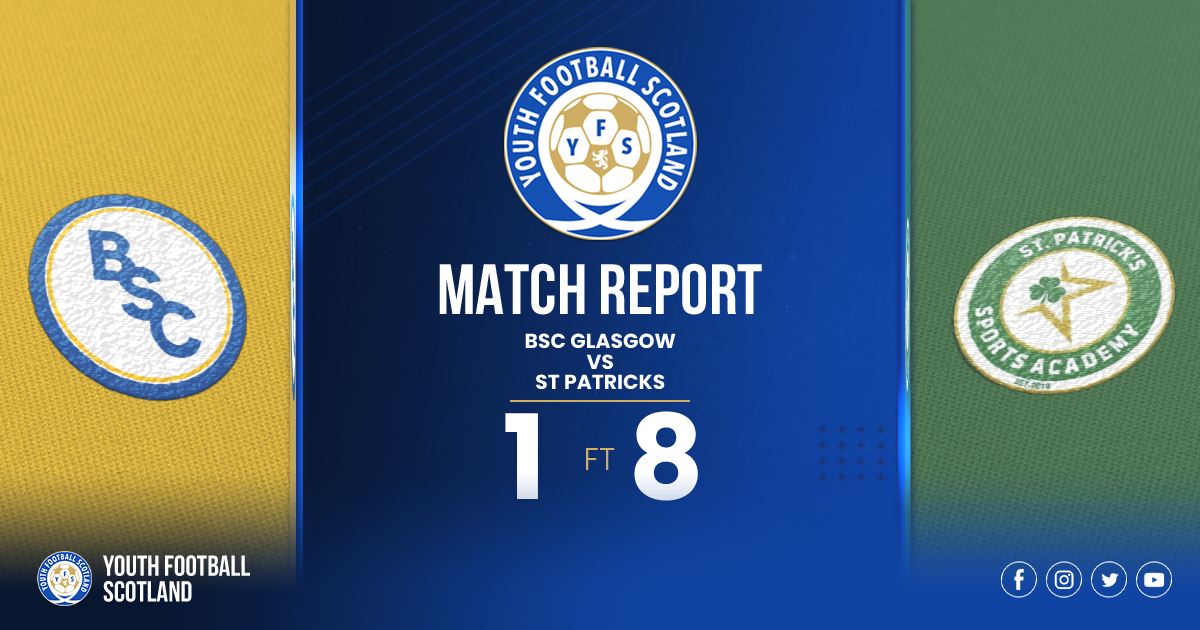 St Patricks cruised to the top of the Glasgow and District Under 16s Divisional Cup Group B with an emphatic 8-1 away win against BSC Glasgow.

The away side started on the front foot in the opening minutes when St Patrick’s Lewis Graham forced the BSC Glasgow goalkeeper Cameron Hill into making a save to divert the ball out for a corner.

It took just 12 minutes before the opening goal, Chris Docherty turning and playing through Graham, who fired the ball into the right-hand bottom corner to make it 1-0 to St Patricks.

Two minutes later, after an appeal for a penalty, St Patricks doubled their lead, Graham was involved again as he played the ball to Ross McNicol who finished on the volley.

BSC Glasgow were not willing to give in yet as Calum Crearie cut the ball back to William Nicolson just inside six-yard box, his shot was fantastically saved by Bradley Dairion.

BSC continued to try and find a way back into the game when Crearie’s fantastic strike came off the middle of the bar only for Dairion to collect again.

St Patricks flew out the traps in the second half to add to their advantage. In the 49th minute, Brayden Allan broke through after an exquisite pass from Rian McLean, Allan proceeded to square the ball to Chris Docherty who made it three.

It was only six minutes later until the visitors scored again, McLean’s perfectly delivered cross was met by the head of Lewis Briery to score.

Briery added to his tally just two minutes later when he cut inside the area and fired a shot into the far bottom corner.

St Patricks were flying and they continued to try up their goal difference at the top of the U16s Divisional Cup Group B. In the 65thminute, BSC Glasgow cleared their lines and the ball was picked up by McLean, who fired a shot which was saved by Hill, but followed in by Luca Ayers to finish.

McLean was involved once again four minutes later, where he ran at the BSC defence, driving into the box and finishing into the bottom right-hand corner..

It was a tough day’s work for BSC but they refused to give in and were desperate to take positives from the game. Nicolson was slipped down the right-hand channel in BSC’s first attack in the second half, he broke past the defenders and squared it to Ballantyne who got one back for the hosts.

St Patricks scored the last goal of the match when Andy Beltramie fired the ball into the roof of the net from outside the area to wrap up the game.

A breath-taking second half display by St Patricks who made it two wins from two in the group stage. A disappointing afternoon from BSC Glasgow, but they were unfortunate to come up against such a strong side on the day, who gave them little opportunities. For the home side, that makes it one point from three games as they will be looking to add to that tally in the three remaining fixtures.

It would have to be their goal, a really clever move with the ball down the channel, a brilliant run and cross from Nicolson, finished off well by Ballantyne.

It has to be the third goal that killed the game. A world class pass from McLean met by a brilliant cross by Allan and a great finish by Docherty.

William Nicolson, he ran the channels all day and worked hard for the team, that worked was emphasised in a very good assist from the number nine.

Rian McLean, he was fantastic all afternoon, involving himself in almost every goal and playing a crucial role in the middle of the park.