Superb Scottish Schoolgirls impress on away day win against England 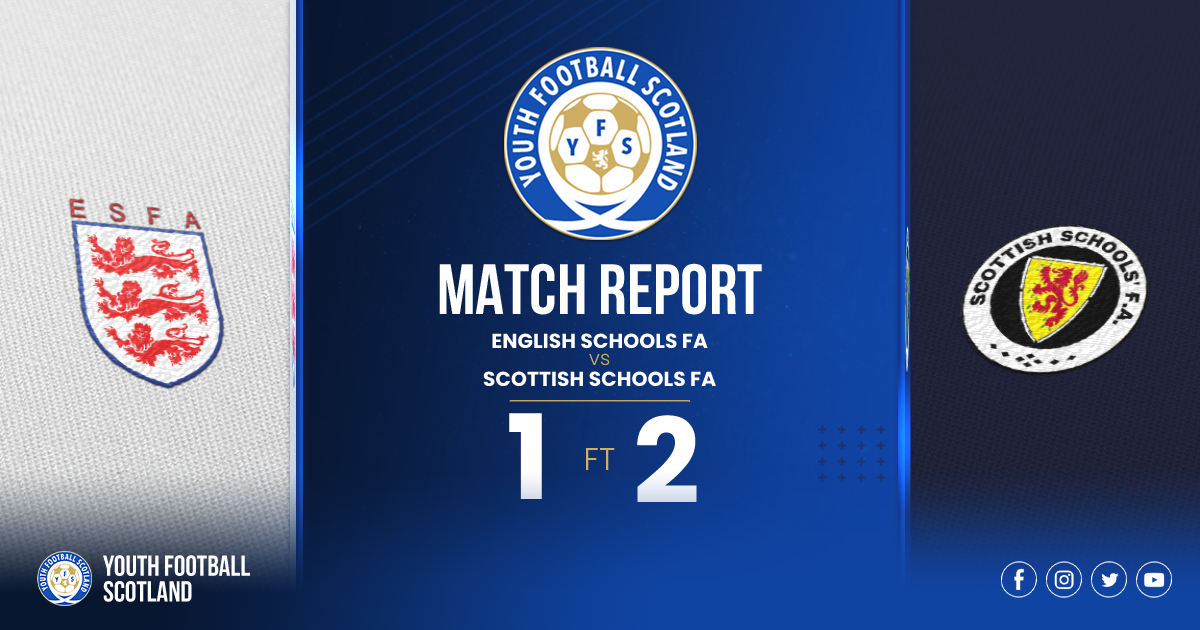 Scotland’s U15 Schoolgirls made the short trip across the border to Newcastle University, to take on their English counterparts in an international challenge match. Unfortunately, the Bob Docherty Cup, which is usually the focal point of the home nations calendar at this level, had been cancelled due to Covid-19. However, everyone involved with the Scotland setup would have been delighted that this fixture should go ahead, giving the talented group of girls the chance to impress on the international stage.

Amongst Scotland’s starting lineup were two history-makers. Kirsty MacLean of Barrhead High School and Olivia Potter, who attends St Columba’s HS, were both representing Scottish Schools FA for the third year in succession. That put them in a group of just twelve players who have managed the feat, which includes the like of Emma Mitchell and Caroline Weir.

MacLean, who was also given the captains armband, proudly lead her side out in the Newcastle sunshine. The Scottish management team consisted of David Thomson, Jim Bettley, Amanda Allan and Mark Grant.

The first chance of the match fell Scotland’s with just under 10 minutes on the clock. MacLean produced a brilliant piece of skill inside the penalty area, before picking out Sophia Ross. She in turn found Niamh Noble, who swung a left-footed shot narrowly wide of the far post. At the other end, Ava Easdon had to be on her toes to deal with a backpass at close quarters.

However, Scotland did not have long to wait before the opening goal did arrive. A brilliant rampaging run saw Eilidh Austin pick the ball up just inside the England half and go past two opponents with a mix of trickery and pace. She then had the composure to lift her head and pick out the onrushing Olivia Potter, who fired the ball high into the net.

Scotland continued to impress and enjoy the better of possession. A series of set-pieces kept the pressure on the hosts, with MacLean showing excellent technique to drive a volley just wide of the target.

Despite being in the ascendency, Scotland were unable to add to their advantage, with the score remaining 1-0 at the break.

Scotland made a number of changes at the break, as the pack was shuffled to ensure playing time for all of the travelling party. However, it did not break the momentum, as the away side continued from where they had left of before the break.

With just three minutes on the clock, Scotland doubled their advantage. A superb piece of combination play between Noble and Caitlin Moran on the left hand side, lead to the former swinging an inviting ball into the penalty area. Emma Watson took the ball in her stride, showed great strength to get goal-side of her marker and was bundled to the ground.

The referee showed no hesitation in pointing to the spot, giving Scotland the chance to extend their lead. The player who won the penalty, Watson, stepped up to take it. The outcome was never in doubt, with an excellently taken penalty finding the bottom left-hand corner.

Scotland could have put the result beyond doubt in the 52nd minute. With the England goalkeeper Sophia Poor coming out of her area and Noble keeping her cool to lob the ball goalwards from 25 yards. England’s skipper Mikayla Wildgoose was well positioned to head Noble’s effort away and impressively made a second block when the loose ball fell to Tiree Burchill.

With the match well into its final quarter, England started to enjoy more of the ball and found themselves in some more advanced positions. They were rewarded for their perseverance as a lost cause was rescued and a challenge in the box resulted in a penalty-kick. It appeared to be a clean tackle but the referee pointed to the spot and Poppy Pritchard squeezed the ball past Annalisa McCann, who was unlucky not to keep it out.

England took confidence from reducing the deficit and pushed hard for an equaliser in the closing stages. Pritchard showed a good turn of pace and hit a powerful drive from the edge of the area, but McCann was equal to it. And it was the England goalscorer who had the final chance of the match as she found space at the back-post but couldn’t direct her shot on goal.

The final whistle blew and Scotland celebrated a tremendous victory. Whilst the scoreline was narrow, nobody would have batted an eyelid if the visitors had scored a few more goals and made things a bit more comfortable. With Covid-19 hampering preparations significantly, the group of players and coaching staff deserve huge credit for the performance.