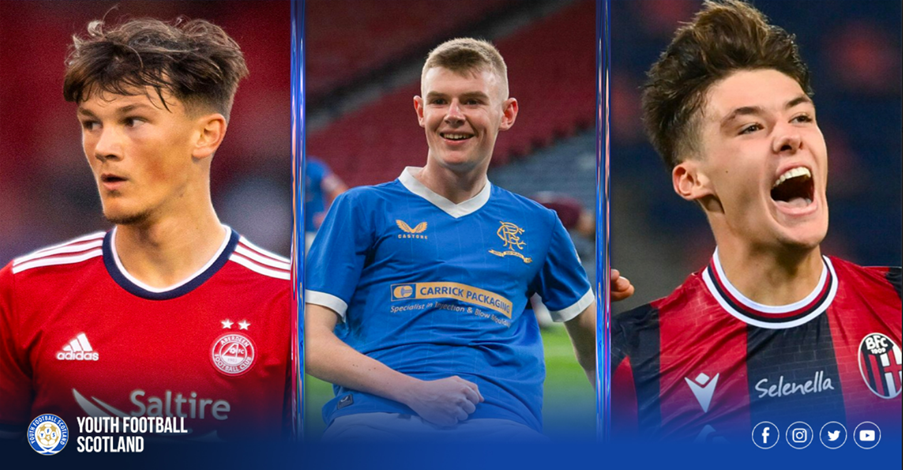 Rory Wilson
Rangers, 16
Rory Wilson is seen as one of the top talents at Ibrox right now. However, Rangers look certain to lose the teenage star with a summer move to Aston Villa looming. Obviously, Steven Gerrard liked what he saw of Wilson during his tenure as Rangers manager. Wilson is still yet to sign his first professional deal but the striker has already signed a six figure deal with Adidas who also view him as one of the best talents in the United Kingdom. The future looks bright for Wilson who has already captured headlines during the 2021/22 season for his contributions within the Rangers and Scotland youth setups.

Alex Lowry
Rangers, 18
Similarly to Rory Wilson, Lowry is also from the Rangers academy and has made more of a step towards professional football this season for Rangers. Lowry has featured for Rangers on four occasions this season with three of these coming in the Scottish cup. Scoring and assisting during the 3-1 win against Hearts from the left wing. Lowry was included in Rangers 23-man squad for the Europa League final and has since attracted interest from Premier League champions Manchester City, who are fighting Newcastle for his signature. Earlier this month, Lowry signed a new 3-year deal to keep him at Ibrox until 2025.

Jay Henderson
St Mirren, 20
Jay Henderson has been a mainstay in the St Mirren midfield this season, making 19 league appearances as well as appearing seven times in domestic cup competitions, Henderson has become a regular first team player this season. He was handed his first team debut in April 2021, where St Mirren beat Hamilton Academical in the Scottish Cup, which saw him extend his deal until the summer of 2023. In his 19 starts for the buddies he has managed two goals which were great strikes against Dundee United on two different occasions. Henderson won the St Mirren young player of the year award, he looks to be a major player in St Mirren’s campaign next season.

Lewis Fiorini
Lincoln City, 20
Manchester City star, Lewis Fiorini, enjoyed an extremely successful loan spell at Lincoln City. From central midfield, Fiorini has bagged six goals and four assists in League One. After helping Lincoln keep their League One status, it has been said he will make the step up to the Championship next season. Also, another player who has won young player of the year with his respective club. Fiorini will be knocking on Steve Clarke’s door if he is to have a successful Championship season next year.

Elliot Anderson
Bristol City, 19
Born in the toon, but of Scottish heritage, Elliot Anderson is another player who has enjoyed a very successful loan spell in England, capturing the eyes of many. On loan at Bristol City in League Two from Newcastle United, Anderson had 13 goal contributions in 21 appearances in League Two, scoring on eight occasions from attacking midfield. Elliot Anderson was a part of that incredible 7-0 win which saw Bristol City go up automatically on goal difference on the final day of the season. Anderson won the EFL young player of the year and EFL League Two goal of the month in April, to add to his individual award he won for goal of the month in March for his strike against Harrogate Town. Anderson has already made his Premier League debut for Newcastle and if Eddie Howe doesn’t require his service next season, it is likely he will be loaned out further.

Aaron Hickey
Bologna F.C, 19
Maybe a slight anomaly on this list as Aaron Hickey was already a well-known name around Scottish Football. However, you can’t make a list on Scottish talent this season without including him. Hickey raised his profile this season in Italy this season for Bologna. The forward-thinking left back has lapped up praise after getting five goals and one assist in Serie A. Hickey’s bravery for taking an alternative route after joining Bologna from Heart of Midlothian has paid off and now seems like he is on the cusp of a move to the English Premier League. He may follow in the footsteps of fellow countryman, Kieran Tierney, in joining the ranks at Arsenal as the gunners are rumoured to have agreed a £21m transfer fee for Hickey’s services.

Kerr Smith
Aston Villa/Dundee United, 17
After making his name at Dundee United at the start of the season, Smith became the youngest player to appear in the Dundee derby aged just 16. After an impressive start to the season with United, Smith joined Aston Villa in January 2022 for an undisclosed fee. Smith is viewed as a bright talent for the future of Scotland’s back line. The centre back is 6ft 2 in height and since joining Aston Villa he has made eight appearances for Aston Villa U23 in the Premier League 2.

Connor Barron
Aberdeen, 19
His loan spell at Kelty Hearts saw Connor Barron recalled by Aberdeen in January, helping Kelty Hearts in the middle of the park, Barron played a big role in Kelty Hearts’ League 1 title victory. Once recalled to Aberdeen, Barron has not looked out of place since, Aberdeen fans hailing him as one of the few players who they would keep on next season, his performances for Aberdeen since January has seen him win Aberdeen young player of the year, whilst also being nominated for the PFA young player of the year award. Despite being small in stature, he makes himself massive in midfield and will be a key component in Jim Goodwin’s side next season.

Ben Doak
Celtic/Liverpool, 16
Ben Doak grabbed headlines after making the switch from Celtic to Liverpool this season. Playing the majority of his games as a right winger, Doak made his debut for Celtic in a 1-0 win over Dundee United as a substitute. He then appeared in the Old Firm derby as he came on in the last minute of the game as Ange Postecoglou attempted to convince Doak that his future was at Celtic Park. A very exciting player in the youth leagues, Doak signed a contract with Liverpool in March 2022, although he won’t be able to play academy football until next season, he is definitely going to be a household name within Scotland in the future. Due to his big move to Liverpool, he has been included in this list as he stole the headlines.

Calvin Ramsay
Aberdeen, 18
Calvin Ramsay to Liverpool seems to be inevitable as Jurgen Klopp has identified the Aberdeen star as backup for Trent Alexander-Arnold, which does not come as a surprise. Calvin Ramsay made his debut during the backend of the 2020/21 season and this season came into his own. Under Stephen Glass, Calvin Ramsay set the league alight after working a great assist on the opening day of the season. Ramsay’s forward way of thinking has seen him linked to clubs all over Europe, as Aberdeen could have lost him in January. Ramsay’s top form slowed down due to injury but at 18, he is certainly a Scotland contender. He may follow fellow right back, Nathan Patterson, in making the switch to Merseyside- just the red half instead of the blue.